85 Reasons Why Fr. Gruner Is An Evil Sonofabitch! 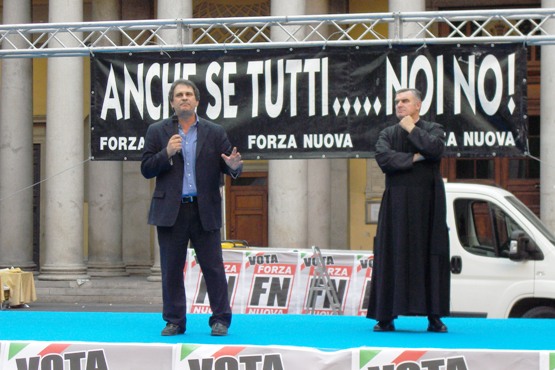 Something is not right here. Either Fr. Gruner has counted his chickens before they were hatched (like his all his plots) or Bishop Fellay hasn't a clue into what he has gotten himself into.

Either way this news is bad news, very bad news.

So one of two things will happen - either Fr. Gruner will issue some sort of retraction stating that indeed Bishop Fellay will not be able to attend the conference or that Mr. Roberto Fiore will not be in attendance - Either - Or - no in between.

But then again most traditionalists probably won't care - no other show in town & Fr Gruner has the lot of you mesmerized.

Here it is from Fr. Gruner on the appearance of Bishop Fellay & Roberto Fiore: 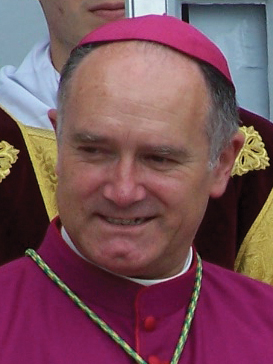 We are pleased to welcome Bishop Bernard Fellay, Superior General of the Society of St. Pius X, to the distinguished assembly of speakers at “Fatima: Path to Peace!”. Bishop Fellay began his priestly studies at the SSPX seminary in Econe, Switzerland, in 1977. He was ordained by Archbishop Marcel Lefebvre in 1982 and acted as Bursar for the SSPX for the next 10 years. In 1988, he was consecrated bishop and in 1994 was elected Superior General. He was re-elected to another 12-year term in 2006. The Fatima Path To Peace Conference

Roberto was born in Rome, Italy on April 15 1959. He is Catholic, married and father of 11 children, he entered in politics in 1973. Since 1997 his political party Forza Nuova is oriented to focus on the well being of Italy. The party’s program is outlined in “8 Steady Points for National Reconstruction”. These points anticipate the main political, economical and social themes of today. He believes in the importance of all sovereign countries to cooperate to achieve the above goals. This policy brought him to travel several times to Russia where he’s willing to establish a cultural and political connection to achieve the project of a Christian and Roman Europe that includes Russia as being the possible future world peace power. He’s also been a European parliamentarian from May 2008 to July 2009. The Fatima Path To Peace Conference

Most of you may not know this but back in 1980 on 2 August (the feast of St. Alphonsus Mary de Liguori, for those who pay attention to such things) a bombing took place at a train station in Bologna Italy - 85 were murdered.

Here is a photo of the terrorist bombing: 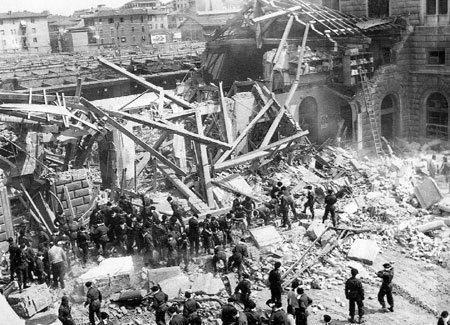 
Notice that Fr. Gruner fails to mention Roberto Fiore's involvement in the Bologna Massacre. Gruner does mention that Fiore was involved in politics by 1973 when he was a ripe old age of 14! No mention of what Fiore did when he was 21!

Did any of you know this little over looked detail about one of Gruner's speakers? Killing 85 souls some 33 years ago and now makes an appearance on the world stage with Fr. Gruner! Wow! what penance Fiore must of done - so great a penance that the crime itself has been erased by Fr Gruner himself!

What happened you say? Well Roberto Fiore being the political animal he is and was belonged to a terrorist organization hell bent on making noise for the love of modern democracy - Nuclei Armati Rivoluzionari - it was formed in 1977 by Roberto Fiore when he was a wee lad of just 18 years and in a few years later Fiore's revolutionary terrorist organization the NAR carried out the terrorist attack killing 85 in Bologna, Italy.

In 1981 Roberto Fiore was a free man & he fled to London. Fiore was never convicted because some Mason in the P2 lodge falsified some info on the up and coming political organizer. Call it a get out of jail free card - nothing ever happened to the Mason who falsified evidence and Roberto Fiore got off scott free - with the help of a Mason!

Just think you form a political organization at the age of 18 that planned and carried out a terrorist attack killing 85 and you just sit there doing nothing, not saying a word, not telling the authorities of the planned attack, keeping silent! WOW! what courage Roberto Fiore has! The sonofabitch claims he is innocent on a technicality - but never claimed he never formed the terrorist NAR & never claimed he never belonged to the NAR.

Here you Latin Mass loving followers of Fr. Gruner  - here is a list of all 85 victims of Roberto Fiore's youthful indiscretion - will any of you offer up Masses for these dead? Cause I'm sure as hell Roberto  Fiore didn't do any penance for his victims!

85 reasons why Fr. Gruner is an evil sonofabitch!

And to think the conference is to be held a week before the feast day of Our Lady of La Salette! 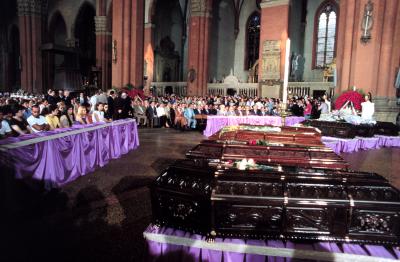 How wicked is it to label your conference "The Fatima Path To Peace Conference" and invite a guy to speak at your conference who murdered 85 in a political terrorist act.

Here are videos of Roberto Fiore: