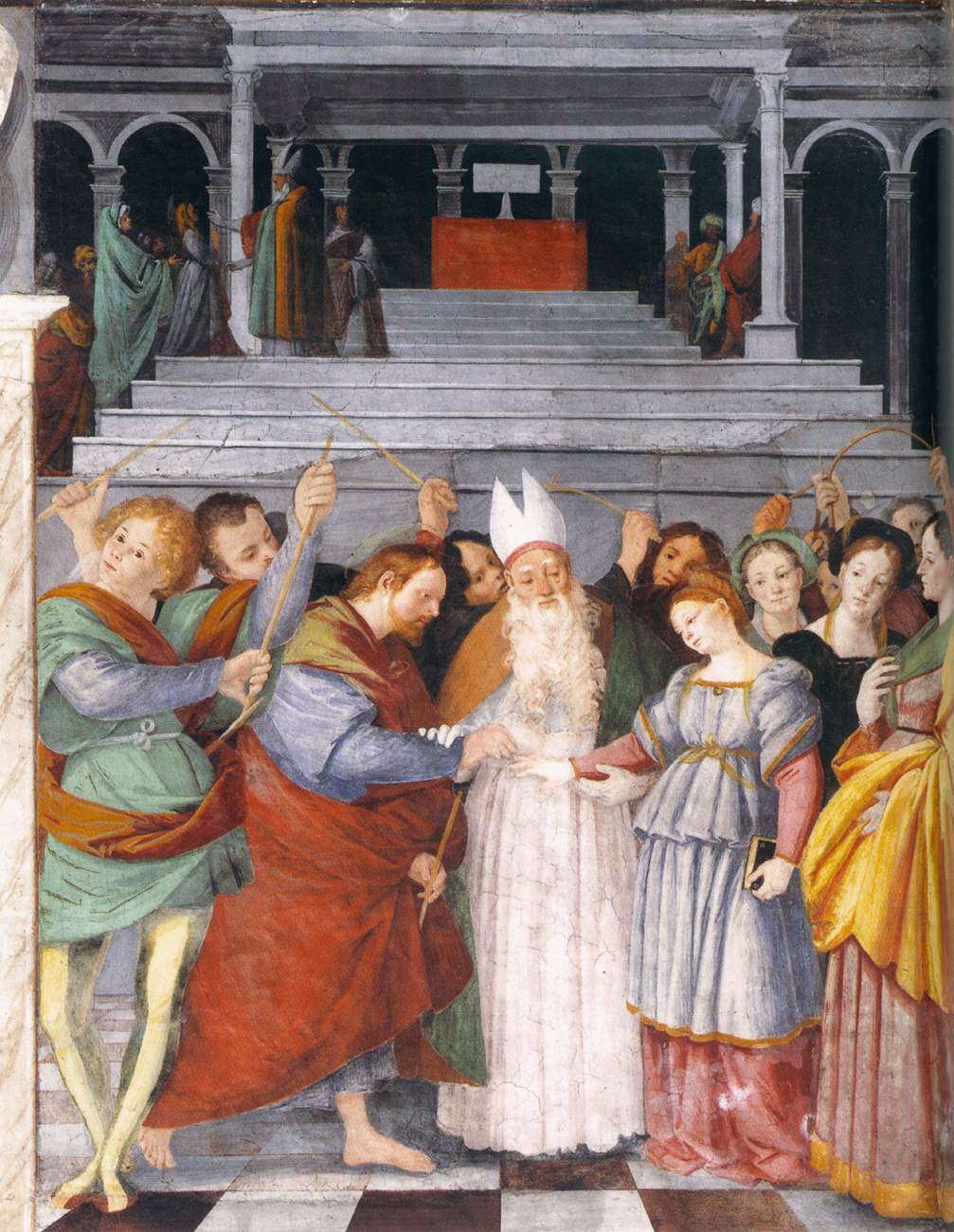 FERRARI, Gaudenzio
Scenes from the Life of Mary: The Presentation and Betrothal of Mary
1533-34


Background on the Moore comparison with Mary & Joseph:

Moore engaged in sexual contact with a 14-year-old girl when he was 32 years old and a powerful attorney in a small Alabama town. Source

“He’s clean as a hound’s tooth,” Ziegler claimed, before relying on Scripture to defend Moore. “Take the Bible. Zachariah and Elizabeth for instance. Zachariah was extremely old to marry Elizabeth and they became the parents of John the Baptist,” Ziegler said choosing his words carefully before invoking Christ. “Also take Joseph and Mary. Mary was a teenager and Joseph was an adult carpenter. They became parents of Jesus.” “There’s just nothing immoral or illegal here,” Ziegler concluded. “Maybe just a little bit unusual.” Source

What my novice director told us about "persecution" may shed light on the case of #RoyMoore, whose supporters are now comparing to Jesus. "Just because you're being opposed doesn't mean you're like Jesus, or even one of the prophets," he said. "It may just mean you're wrong."
— James Martin, SJ (@JamesMartinSJ) November 10, 2017

About #RoyMoore, accused of the sexual abuse, or sexual harassment, of minors, and who has been likened by some supporters to Mary and Joseph, because Mary was a teenager and Joseph an adult, and whose brother has just compared him to Jesus. Let me say this... /1
— James Martin, SJ (@JamesMartinSJ) November 10, 2017

First, sexual abuse is a crime. Any comparison between the loving relationship that existed between Mary and Joseph and sexual abuse, or sexual harassment, is monstrous, even blasphemous. /2
— James Martin, SJ (@JamesMartinSJ) November 10, 2017

Second, despite the familiar artistic representations, we have no idea of the ages of Mary and Joseph at the time of their betrothal and marriage. The Gospels do not specify this, other than to call Mary a "parthenon" (in Greek, either a young woman or a virgin). /3
— James Martin, SJ (@JamesMartinSJ) November 10, 2017

Joseph is often depicted in art as older than Mary, in fact, considerably older, so as to make him seem less "sexualized," and to emphasize Mary's virginity. But, in fact, both Mary and Joseph could have been the same age. /4
— James Martin, SJ (@JamesMartinSJ) November 10, 2017

Again, using the relationship of Mary and Joseph to, in any way, excuse or legitimize the sexual abuse or sexual harassment of a minor, or anyone, is monstrous. /5
— James Martin, SJ (@JamesMartinSJ) November 10, 2017