A little delayed but within the parameters.

What started this Doom Novena was the Pope's prayer for the Orlando Gay Club massacre:

(Vatican Radio) Pope Francis is shaken and saddened by the ‘homicidal folly and senseless hatred’ that has left at least 50 people dead in an attack on a nightclub in Orlando, Florida. A statement released by the Holy See Press Office Director, Father Federico Lombardi SJ, on the Orlando massacre which has been described as the worst mass shooting in American history. Please find below Vatican Radio’s translation of the statement:

The terrible massacre that has taken place in Orlando, with its dreadfully high number of innocent victims, has caused in Pope Francis, and in all of us, the deepest feelings of horror and condemnation, of pain and turmoil before this new manifestation of homicidal folly and senseless hatred. Pope Francis joins the families of the victims and all of the injured in prayer and in compassion. Sharing in their indescribable suffering he entrusts them to the Lord so they may find comfort. We all hope that ways may be found, as soon as possible, to effectively identify and contrast the causes of such terrible and absurd violence which so deeply upsets the desire for peace of the American people and of the whole of humanity.

The attack, which took place early Sunday in a crowded nightclub, was perpetrated by a gunman wielding an assault-type rifle and a handgun. Authorities are reportedly investigating the attack as an act of terrorism. Officials said at least 53 other people were hospitalized, most in critical condition. A surgeon at Orlando Regional Medical Center said the death toll was likely to climb.

Cheeky dismissal was made of my Pope Francis Doom Novenas:


Anonymous June 13, 2016 at 5:46 PM I'm going to register a cheeky dismissal of this doom novena. I think it's superstitious to predict bad things that you think will happen in the future. No one knows the future except God, and it's ridiculous to pretend otherwise. Furthermore, something horrible happens somewhere in the world nearly every day, so it's pretty easy to say something bad will happen somewhere nine days from now and be somewhat right.

Now usually within a nine day period more death and destruction follow the Pope's original prayers for victims of some tragic event - like Orlando.

What happened during this Doom Novena?

Well it was quiet for about a week until 200 died in a tornado in China:

Of course no one paid attention to the death of over 200 Chinamen.

Then there was yesterday's attack in Mogadishu

But no one pays attention to Somali

Then today there's this in Turkey:

Three suicide bombers have killed up to 50 people and wounded more than 100 in a 'major, co-ordinated' attack at Istanbul's Ataturk Airport, opening fire with AK-47s and sparking a shoot-out with security personnel before blowing themselves up. Eyewitnesses have told how a hero policeman wrestled a suicide bomber to the ground just seconds before he detonated his explosives at the entrance to the airport's international arrivals terminal. It is believed the gunmen were trying to pass through the security x-ray machines at the entrance to the airport, the third busiest in Europe, when they were stopped by security officers and carried out their lethal attack. Reports tonight claim that ISIS is to blame for the attack, according to Turkey's Dogan news agency citing police sources, however there has yet been no official claim of responsibility. At least one of the attackers is reported to have been a foreign national. Turkish Airlines is the official airline partner to the Euro 2016 football tournament, being held in France. Daily Mail Read More>>>>>>>

Pope Francis considers himself a Pope of Peace...

The reality is, is that, Pope Francis is a Pope of  Peace, but of a False Peace, as Our Lady of La Salette had said:

And that time is now. 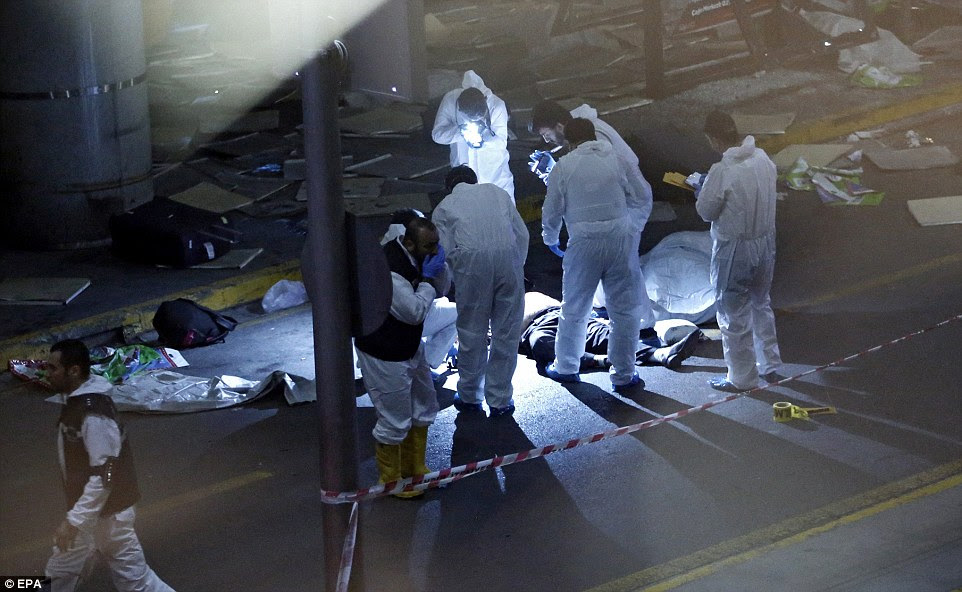