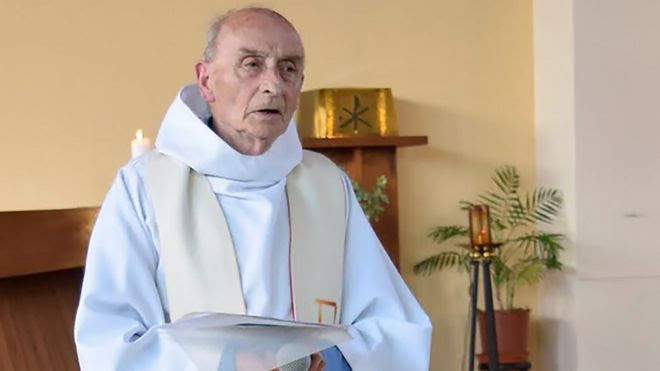 Blood will flow on all sides. Churches will be locked up or desecrated. Priests and religious orders will be hunted down, and made to die a cruel death. Our Lady of La Salette 19 Sept. 1846 (Published by Mélanie 1879)


The first martyred priest is Fr. Jacques Hamel. He had his throat slit by Muslim Immigrants this morning during the 9 AM Mass

The murder of a priest and the wounding of one of his parishioners in Normandy was an act of terrorism carried out by two followers of Islamic State, the French president, François Hollande, has said. The men, armed with knives, entered the church at Saint-Étienne-du-Rouvray, near Rouen, at 9.43am local time during morning prayers and took five hostages. Father Jacques Hamel, 84, who was held captive along with two nuns and two parishioners, had his throat slit, investigative sources said, while the other victim was described as being seriously injured and between “life and death”. The two hostage-takers were shot dead by police as they came out of the church. Guardian Read More>>>>>

“This was a man who did his job to the very end. He was old, but always available for everyone. He was a good priest. He had been here for many years; he lived in the rectory here. Many parishioners knew him very well.”