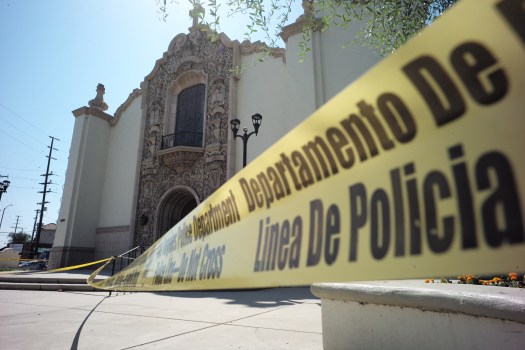 Some Rad Trads are taking Hilary White's words to heart.

Peasants are getting ready with the pitchforks and torches, that plans for DIY gallows are being Googled… Source

The interior of one of Los Angeles' best known Catholic churches was badly damaged by a vandal who broke into the building Wednesday morning and caused more than $100,000 in damage, police said. The perpetrator also set fire to trash bins along Moorpark Street, damaged two cars and scrawled graffiti on a Chase Bank building. The perpetrator used a pole to smash a window to enter St. Charles Borromeo Catholic Church at 10800 Moorpark St. The Spanish colonial style church is known for its distinctive bell tower. Los Angeles Police Deputy Chief Horace Frank said the vandal’s motive remains unknown, but given the randomness of the targets, investigators do not believe the incident is a hate crime. Inside the church, several statues and stained glass windows with ornamental fittings were smashed. Source