Man Threatens To SHOOT UP NEW MASS GOERS At Queen of the Angels, Riverside, CA 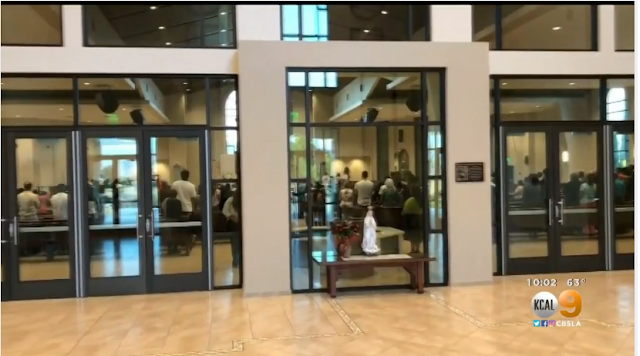 RIVERSIDE (CBSLA) — Mass was interrupted Sunday at a church in Riverside when a man came rushing in saying he was going to shoot everyone.

Video showed a woman racing in and saying, “We’re all going to die” in Spanish, causing even more panic.

Officials said the woman ran into the Queen of the Angels church believing the man was armed. Moments later, witness Michelle Cardona said everyone in the back of the church began sitting and ducking down.

At this point, a man ran in saying, “Everyone down, there’s someone in the back with a gun. He’s going to kill all of us.”

As a precaution, police were dispatched to churches and houses of worship in the immediate area.

CBS2/KCAL9’s Jake Reiner says the suspect was detained near an outdoor swap meet located in the 300 block of Van Buren.

No weapon was found on the suspect or his vehicle.

The suspect was identified as a Riverside man. No motive was given for the threat.

Despite the fear of some congregants, evening mass went on as planned, around 7 p.m.

All was peaceful and calm, but Reiner says Cardona told him she isn’t sure she would be coming back next Sunday.

Cardona and her family attend the services here ever week.

She said while the man was yelling about everyone being killed, she really couldn’t make out what he was saying, because he was behind glass doors. But the woman who first cried out told Cardona the man was praying by a fountain of holy water and said, “God forgive me for what I’m about to do” and he threw a cross on the ground.

Cardona called 911 and also ducked down with her little brother and sister. She began recording the strange incident.

In the meantime, a priest tried to keep everyone calm continuing with the mass by singing and praying.

“I thought that was really beautiful,” says Cardona, “that he was still remaining calm.”

The fact the suspect has been taken into custody also gives her some sense of relief.

“At church today, someone said we’re not going to die, we’re going to be safe. We’re in God’s arms. No one got hurt, we were all safe so I feel like with that we can still keep going to church.”