AMY CONET BARRETT: “I Want To Be Very, Very Careful...I'm Under Oath....I Can. I Have And Will Set Aside (Deny) My Catholic Beliefs Regarding All Issues Set Before Me" 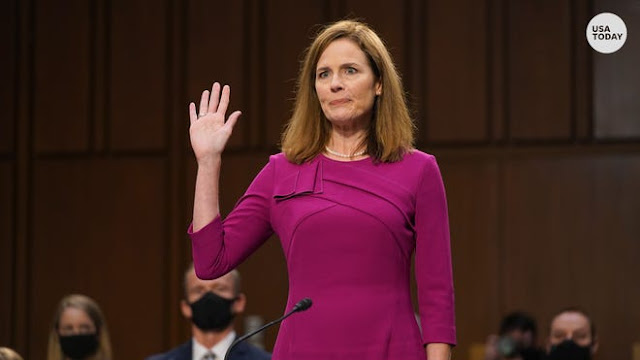 “All the civil governments will have one and the same plan, which will be to abolish and do away with every religious principal to make way for materialism, atheism, spiritualism and vice of all kinds. Our Lady of La Salette 19 Sept. 1846 (Published by Mélanie 1879)
While Under OATH Amy Conet Barrett said that she can and will set aside (deny) her Catholic beliefs
regarding any issue before her..
So according to the "Catholic" Amy the laws of the United States take precedent over the Commandments and teachings of Jesus Christ and His Church?
AMY CONET BARRETT: “I Want To Be Very, Very Careful...I'm Under Oath...
SEN. LINDSEY GRAHAM: Can you set aside whatever Catholic beliefs you have regarding any issue before you?
AMY CONET BARRETT: I can. I have done that in my time on the Seventh Circuit. If I stay on the Seventh Circuit, I'll continue to do that. If I'm confirmed to the Supreme Court, I will do that still.
Well then under Oath she denies the Catholic Faith...