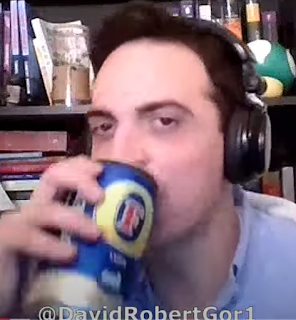 Tim and Dave emulating all the tough guys on the Internet....
They're idea of Catholic masculinity is grunting after every Hail Mary.

Who is tough guy "Jack Murphy"?

The conservative movement is depraved and decadent. And no, I’m not saying this because of the impending anniversary of Jan. 6, which does happen to feature the freakish “QAnon Shaman.” My statement was actually prompted by a mass shooting in Denver last week. The shooter interacted with several alt-right “manosphere” authors on Twitter. One name that stood out to me was Jack Murphy, who used to go by the name John Goldman. He was briefly in the news a few years ago, after he was fired for writing some crazy misogynistic stuff like “feminists need rape.” Murphy believes he’s been canceled, but he has spent the past year as a Lincoln Fellow at the Claremont Institute. Claremont used to be a highly respected conservative intellectual institution, but now it’s Flight-93 all the time—and worse. In addition to holding this once-prestigious fellowship, this trad Chad also runs a $99-a-month “private” men-only community “the Liminal Order” whose members supposedly teach each other how to be stronger, richer, and more masculine. It offers dubious advice like: “The world always needs a villain and today, that villain is the white straight male who knows what he wants and is unafraid to get it. Be the villain. Embrace it.” Embrace it, he has! While he isn’t responsible for the revenge killings that a fan of his committed, salacious revelations about Murphy’s life resurfaced in the aftermath after those killings, including something he wrote in 2015 about sharing his “hot young girlfriend” with a “stranger from Tinder.” Just before Christmas, Sydney Watson asked Murphy about it on Blaze TV, and it did not go well. He cursed her and attempted to intimidate her for bringing up the incident. Source