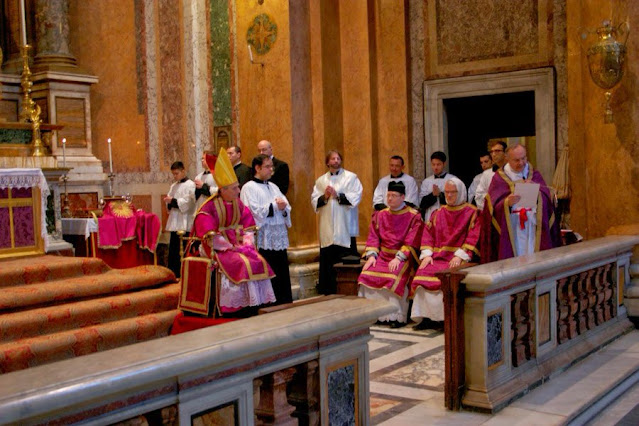 TLM ALLY TO REPLACE ITALIAN CARDINAL
Zuppi, known politically for his peace activism (brokering peace during the Mozambique Civil War, helping to end the conflict in 1992) and, amongst Traditional circles, for his friendly outreach to the Priestly Fraternity of St. Peter (FSSP) in 2014. Bishop Zuppi asked the FSSP priests in Rome not only if he could offer Laetare Sunday Mass (the "Joyful" Fourth Sunday of Lent) with them but also if they would teach him to say the Pontifical High Mass. The beautiful ceremony took place at the FSSP parish in Rome, Santissima Trinita Dei Pellegrini (Church of the Most Holy Trinity of Pilgrims) on March 30, 2014. Parishioners who attended the Mass recall that Bp. Zuppi apologized in advance for any mistakes he might make during his first celebration of the Tridentine Usage of the Roman Rite. Although Bp Zuppi is relatively young to become a cardinal (60), some in Rome speculate that Pope Francis appointed him because he has "always been attentive to the poor." Source

Homosexual civil union blessed at 'Thanksgiving Mass' in Bologna church
BOLOGNA, Italy (ChurchMilitant.com) - Cardinal Matteo Zuppi, the president of the Italian Episcopal Conference, is tacitly approving Italy's first public same-sex blessing, held in his archdiocese of Bologna. Father Gabriele Davalli blessed homosexual couple Pietro Morotti and Giacomo Spagnoli on Saturday at the parish church of San Lorenzo, Budrio, in flagrant violation of the Vatican's recent prohibition of same-sex blessings. Davalli, who heads the Pastoral Office for the Family under Cdl. Zuppi, presided over an illicit "Thanksgiving Mass" to celebrate the union of Morotti and Spagnoli, just after the two homosexuals registered their civil union in the municipality of Budrio. Zuppi is one of the leading papabile candidates listed by Vaticanist Edward Pentin in his book The Next Pope: The Leading Cardinal Candidates. Last month, Italy's Gay.it described him as "one of the cardinals closest to the LGBTQ + community ever." Nuptial Mass? The cardinal-archbishop of Bologna was informed and gave his permission for the service, in which at least six other priests concelebrated before a congregation packed with parents, relatives and friends of the homosexual couple. The Mass was not advertised in the parish bulletin and is not a regular service on the parish calendar but was organized specially for the couple. The concelebrants donned vestments in liturgical red, marking the martyrdom of St. Barnabas, the saint of the day. Source 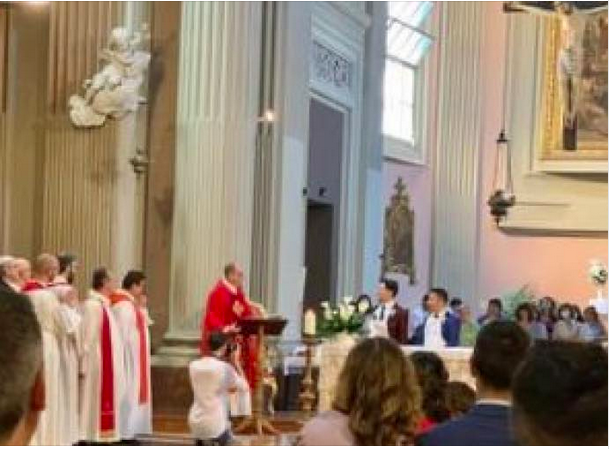