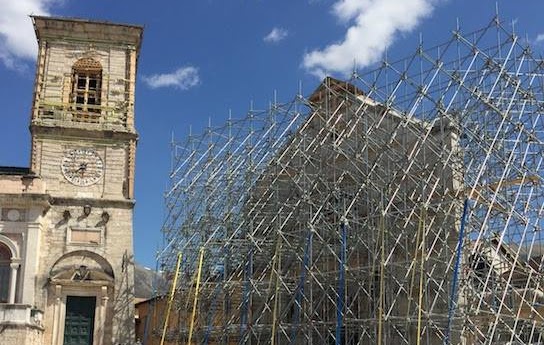 One Peter Fiver On Why The Monks Of Norcia Escaped Major Catastrophic Loss:

Chloe Guest • 8 months ago Can't help feeling that the fact that Norcia has minimal casualties compared to the rest of the area, where whole towns are destroyed, might just mean the monks are in good standing with God! If that's the case, who cares what anybody else thinks?

Prophetess Ann Barnhardt On Why The Monks Of Norcia Escaped Major Catastrophic Loss:

There was an earthquake overnight in Italy, the epicenter, to my and so many other folks’ initial horror, was Norcia, Italy, where the Benedictine monks who make the spectacular beer and chant the entire Divine Office publicly, are located.

Miraculously, despite the epicenter of the initial quake (6.2 magnitude), and the 40 aftershocks, with many of those being in the 4.0-5.5 range, being within just a few miles of Norcia, reports are that Norcia took only minor, superficial damage, mostly fallen plaster and some light masonry damage. Some houses took zero damage – not even fallen plaster or broken glassware. That is simply incredible for being the epicenter of a 6.2.

Sadly, other towns nearby, worst among them a town called Amatrice, have taken heavy damage, with the death toll now over 20.

I’ll say it right now: I believe that those monks and their chanting of the Divine Office and their daily offering of the Holy Sacrifice of the Mass in the Venerable Gregorian Rite put a hedge of protection over the town of Norcia. I believe Norcia and its inhabitants were spared what should have been, by all scientific appearances, catastrophic damage. Earthquake In Norcia, Italy


Hilary White Making Light Of The Earthquake in which hundreds died:

"They told me that the archbishop of Spoleto, Renato Boccardo, age 64 -- who has jurisdiction over Norcia -- has decided that he will rebuild the Basilica of St. Benedict in a modern style of architecture. He will also take possession of the quarters where the monks had been living from the year 2000 until October 2016. He will use the quarters as a part-time episcopal residence.

"So the Benedictine monks of Father Cassian will not return to the center of Norcia, to the spot where St. Benedict and his twin sister St. Scholastica were born. That period of the monastery's life is over now, it seems. The monastery will now be built on the hillside above the city, about two miles outside of the city walls." Source

For 16 years, the monks acted as guardians over the historic birth home of St. Benedict and his twin sister St. Scholastica. The monks are grateful to the many who helped them restore the basilica to great beauty over the course of those blessed years. Now, the European Union and the Italian state have pledged to restore the basilica and monastery. The Archdiocese of Spoleto-Norcia, which owns the buildings, has decided that the spaces will have to be used by the diocese since all the other churches in town were also destroyed. Throughout the many years needed for the massive work of reconstruction, while the monks work to build the new monastery in Monte, their hearts will remain there in the ancient crypt of the basilica, the birth home to their great founder and father, St. Benedict.

For the monks it is a time to focus on new building projects at our home in the Norcia mountains, following the request from the archdiocese asking us to free up space in our buildings in town (which belong to the diocese) for their own needs. The archdiocese has hundreds of damaged properties and the buildings in town were among the least damaged. We see their request as a sign of God’s will as we too can begin a new chapter of our community’s life on the mountainside. Source