Two Diocesan Priests complaining about the uncharitable behavior of those who attend Latin Mass at Diocesan approve Latin Masses - NOTE these RAD TRADS that are bullying Diocesan Latin Mass saying Priests are influenced by and are followers of the top Rad Trad Blogs:


The first priest was a seminarian when Summorum Pontificum was promulgated. He always had a deep respect for Catholic tradition and the traditional liturgy. Like many other traditional-minded seminarians, he had to kind of keep his head down throughout seminary. He maintained a respectful silence in the face of progressive indoctrination, did his required reading by day but studied Aquinas and the Fathers by night, and practiced penance privately while his fellow seminarians were spending their free time watching movies. He is a good and gentle soul. When Benedict XVI issued the motu proprio, he was excited to make himself available to the faithful to celebrate the traditional Mass. After ordination and his first parish assignment, this priest was generous in promoting the traditional Latin Mass and offered it to a "stable group" on a semi-regular basis. Those days are long gone. This priest no longer offers the traditional Latin Mass, nor has he for years. He explained that the people who attended the traditional Latin Mass were so mean-spirited, so hyper-critical, just so obnoxious, that he eventually stopped offering the traditional Mass altogether. Perhaps the saddest thing about the story is this priest's personal interest in traditional Catholicism had began to wane. He wants nothing to do with the Latin Mass community.

The second priest had been ordained for some time when Summorum Pontificum came out. He had long desired to offer the traditional Mass and was in the process of training for a celebret under the indult when Summorum Pontificum was promulgated. He had always loved the traditional Mass because of its reverence and the centrality of God. He was excited to be able to offer the Latin Mass without any permission. He has now been offering the traditional Latin Mass regularly for almost a decade. His traditional Latin Mass liturgy has grown to around 75+ congregants. "If I would have known back then what these people are actually like, I would have never begun offering the Latin Mass," he told me dryly. Source

Gee just read the comments on One Peter Five or read the nasty posts of Dave Doment at Vox Cantoris or Ann Barnhardt's blog and you start to understand that their on-line blogging comments carry over into real life at the Diocesan perish level.

All of these Rad Trads Bloggers and their followers refuse to attend the SSPX masses BECAUSE THE SSPX wouldn't put up with their wicked and borish behavior.

This is a Diocesan problem.

Propbably a problem at the FSSP as well.

Again as I have pointed out many times before, that the Latin Mass laity do not know their place - they are always playing the part of the Priest (Just look at all the lay focus on priestly matters: Synod on the Family - AL - DUBIA- Knights of Malta etc.) The Laity forget that there is an Altar railing with the laity on one side and the priest on the other.

STAY ON YOUR SIDE OF THE ALTAR RAILING! 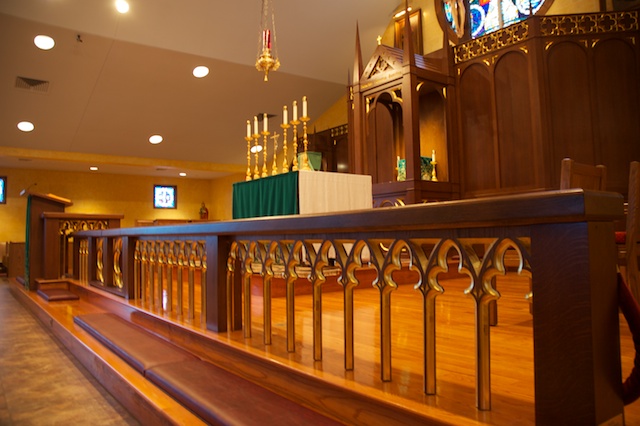