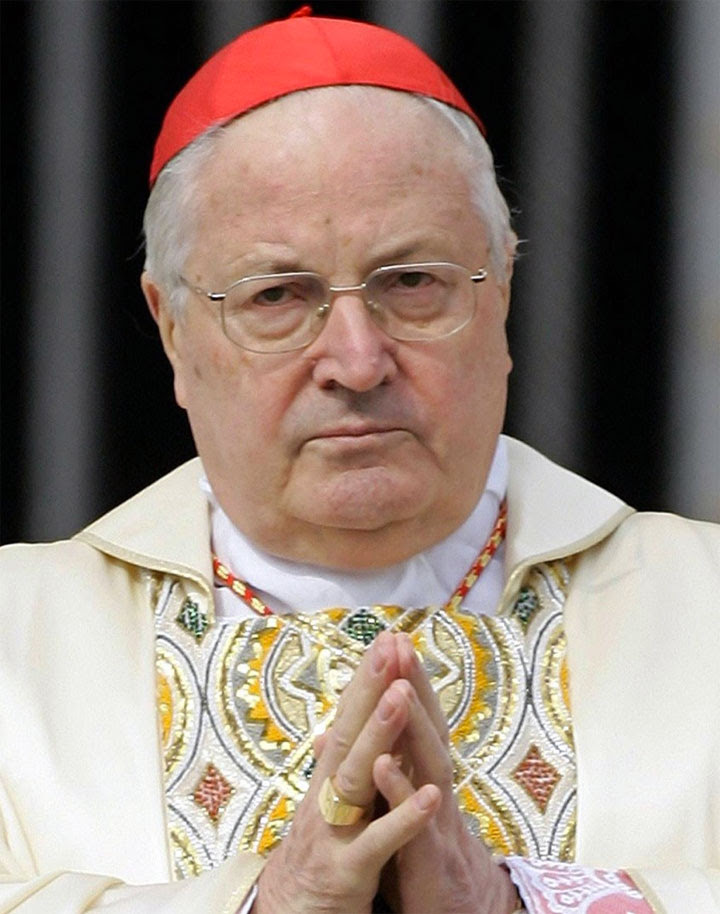 Sodano is connected to many many disturbing things, just google him...Fr. RP

I was in his presence more than once, and he gave forth an aura that was most dark. In fact, a Bishop, of whom I do not know his name, spoke of the Most Blessed Virgin in his presence and looked directly at him many times and each time Sodano was hunched over with a dark grey cloud surrounding him.

I ended up with a severe fever that almost cost me my life. I'm not kidding nor exaggerating. The holy sisters who were in charge of where I was staying were very upset with my sudden illness and sat beside me for more than a day praying and seeking to alleviate my sudden and serious illness. They helped me to offer the Holy Mass from my sick bed and I was better the next day ( yes, I offered the Holy Mass lying in my sick bed with a portable altar resting upon my chest and the good sisters assisted me beseeching almighty God for my recovery, such was the severity of my fever and illness.)

That day with Sodano I saw several members of the hierarchy manifesting serious demonic possession (in most grotesques ways) , except the one who extoled the Blessed Virgin and who intentionally kept looking directly at Sodano.

Later, after I had recovered I was present at an exhortation of Sodano and all that filled me was total revulsion and a desire to flee.

PS: I subsequently spent a few days with Fr. Anthony Fortea, chief exorcist of Spain and author of the Summa Daemoniaca, and he related to me that he had had very similar experiences in the presence of similar members of the hierarchy. In a setting of several hundred people he and I ended up together. It was not a coincidence, but rather the work of providence as we assisted each other, he assisted me much more than I assisted him.

Father Fortea told the most important truth to the exorcists gathered at that meeting, that the most important thing that they could do for the deliverance of souls was to lead a holy life. Unfortunately, the other 'experts' who were present undermined Fr. Fortea and focused mostly on externals and formulas. Fr. Fortea was correct. Holiness of life is the most powerful weapon against the Archenemy of Souls. St. Catherine of Sienna could exorcise a person with nothing more than a look or a hug. And yet, most of the priests present were far more interested in 'more powerful prayers' and not personal holiness, they treated exorcism prayers like spells as well as blessings etc.

I even had to correct a Bishop during his presentation and quoted St, John Damascene as my reference to which he poo pooed (he was in favor of giving the Most Blessed Sacrament to public notorious sinners.) Later, when walking down a path, he came along with his retinue and I looked him directly in the eye with serious intent and he put his head down and refused to meet my gaze but went out of his way to pass by me without looking at me. He is an appointee of Cardinal Bernadine a former auxiliary of Chicago who is now an Ordinary.

For my part, my own Bishop was present and I personally requested permission of him to offer the Holy Sacrifice in private, as the public offering was seriously scandalous and he did said he wished that he could join me apart from the 'gathering' but felt that he could not based upon his office. Source