To Our Muslim Brothers And Sister By Father Ronald Rolheiser OMI 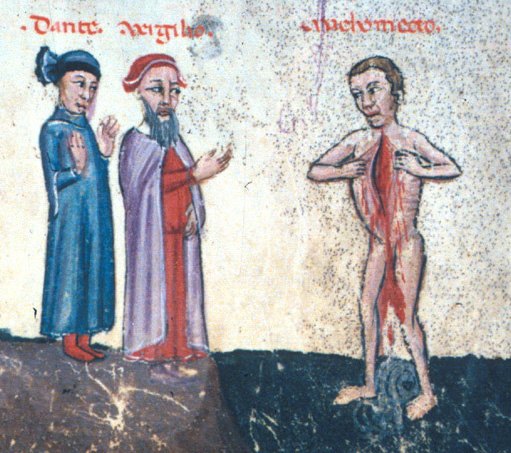 'See how I rend myself, see how mangled is Mohammed!'

Our Muslim brothers and sisters

This is not a good time to be a Muslim in the Western world. As the violence perpetrated by radical Islamic groups such as ISIS, Al Qaeda and Boko Haram becomes more and more prevalent, huge numbers of people are becoming paranoid about, and even openly hostile towards, the Islam religion, seeing all Muslims as a threat.

Popular opinion more and more blames the Muslim religion itself for that violence, suggesting that there is something inherent in Islam itself that’s responsible for this kind of violence. That equation needs to be challenged, both in the name of truth and in the name of what’s best in us as Christians.

Second, it’s also unfair: Islamic militants no more speak for Islam than Hitler speaks for Christianity (and that comparison isn’t idly chosen). Finally, such an equation misleads our sympathy: The first victim of Islamic terrorism is Islam itself, namely, authentic God-fearing Muslims are the first victims of this violence.

When we look at the history of any terrorist Islamic group such as ISIS or Al-Qaeda, we see that it first establishes itself by terrorizing and killing thousands of its own people, honest, God-fearing Muslims. And it goes on killing them. ISIS, Al-Qaeda and Boko Haram have killed thousands more Muslims than they have killed Christians or persons of any other religion. While their ultimate target may well be the secularized Christian West, more immediately their real war is against true Islam.

Moreover the victims of Islamic terrorists are not just the thousands of moderate Muslims who have been direct victims of their violence and killings, but also all other Muslims who are now painted with the same brush and negatively judged in both their religiosity and their sincerity. Whenever Islamic terrorists perpetrate an act of violence, its victims are not just those who die, are injured, or who lose loved ones, it’s also all true Muslims, particularly those living in the West because they are now viewed through the eyes of suspicion, fear and hatred.

But the Muslim religion is not to blame here. There is nothing inherent in either the Koran or in Islam itself that morally or religiously undergirds this kind of violence.

We would holler “unfair” if someone were to say that what happened during the Inquisition is inherent in the Gospels. We owe Islam the same judgment. One of the great students of world religions, the renowned Houston Smith, submits that we should always judge a religion by its best expressions, by its saints and graced-history, rather than by its psychopaths and aberrations.

I hope that others offer us, Christians, this courtesy. Hitler was somehow a product of the Christian West, as was Mother Teresa. Houston Smith’s point is that the latter, not the former, is a truer basis for judging Christianity. We owe our Islamic brothers and sisters the same courtesy.

And that’s more a recognition of the truth than a courtesy. The word “Islam/Muslim” has its origins in the word “peace,” and that connotation, along with the concept of “surrender to God,” constitutes the essence of what it means to be a Muslim. And for more than 90 percent of Muslims in the world, that is exactly what it means to be a Muslim, namely, to be a man or woman of peace who has surrendered to God and who now tries to live a life that is centered on faith, prayer, responsibility and hospitality.

Any interpretation of Islam by a radicalized group that gives divine sanction to terrorist violence is false and belies Islam. Islamic extremists don’t speak for God, Mohammed, Islam, or for what it means to surrender in faith, but only for a self-serving ideology, and true Muslims are, in the end, the real victims of that.

Terrorist attacks, like the recent ones in Paris and Mali, call for more, not less, sympathy for true Muslims. It’s time to establish a greater solidarity with Islam, notwithstanding extremist terrorism.

We are both part of the same family: We have the same God, suffer the same anxieties, are subject to the same mortality, and will share the same heaven. Muslims more than ever need our understanding, sympathy, support and fellowship in faith.

Christian de Cherge, the Trappist monk who was martyred by Islamic terrorists in Algeria in 1996, wrote a remarkable letter to his family in France shortly before he died. Well aware that he had a good chance of being killed by terrorists, he shared with his family that, should this happen, they should know that he had already forgiven his killers and that he foresaw himself and them, his killers, in the same heaven, playing together under God’s gaze, a gaze that lovingly takes in all of God’s children, Muslims no less than Christians.