When The First Muslim Attack On A Catholics At Mass Takes Place There Will Be Blood On The Hands Of Archbishop William E. Lori of Baltimore Who Said: "Catholics Shouldn’t Support Trump’s Ban On Muslims!" 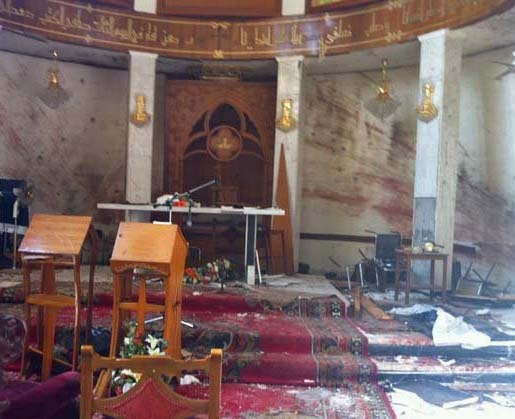 Our Lady of Salvation Syriac Catholic Church in Baghdad.
Oct. 31, 2010

“The priests, ministers of my Son, the priests, by their wicked lives, by their irreverence and their impiety in the celebration of the holy mysteries, by their love of money, their love of honors and pleasures, and the priests have become cesspools of impurity. Yes, the priests are asking vengeance, and vengeance is hanging over their heads. Woe to the priests and to those dedicated to God who by their unfaithfulness and their wicked lives are crucifying my Son again! The sins of those dedicated to God cry out towards Heaven and call for vengeance, and now vengeance is at their door, for there is no one left to beg mercy and forgiveness for the people. There are no more generous souls; there is no one left worthy of offering a stainless sacrifice to the Eternal for the sake of the world.Our Lady of La Salette 19 Sept. 1846 (Published by Mélanie 1879)

When the first Muslim attack takes place at a Roman Catholic Church here in America killing several Catholics during Mass Archbishop William E. Lori of Baltimore will be to blame:

ROME — The threat of terrorism must be confronted sensibly and not by restrictions based on religion, which ultimately threaten religious freedom and incite more violence, said Archbishop William E. Lori of Baltimore, chairman of the US bishops’ Ad Hoc Committee for Religious Liberty. “As citizens and as believers, Christians and Catholics in the United States cannot possibly countenance” denying people entry into the country due solely to religious affiliation, he told Catholic News Service. Lori was in Rome for a Dec. 10-12 international conference on Christian persecution in the world, held at the Pontifical Urbanian University. CruxNews Read More>>>>>