Blessed Jacinta Vision Of Pope Kneeling In Big House Is Pope Francis? & Those Cursing Him And Using Bad Language Are Traditionalist Bloggers??? 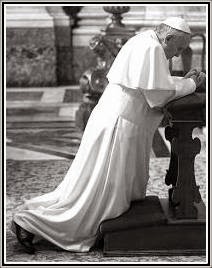 "I saw the Holy Father in a very big house, kneeling by a table,
with his head buried in his hands, and he was weeping.
Outside the house, there were many people.
Some of them were throwing stones,
others were cursing him and using bad language.
Poor Holy Father, we must pray very much for him." - Blessed Jacinta

Terry Nelson hints here that the Pope in the vision of  Blessed Jacinta is Pope Francis and his attackers are Bloggers who attend the Latin Mass. This is stretching things a bit. For one thing, the only blogger that may use harsh language is myself on my blog Pope Francis the Destroyer see here and of course some have followed suit like Ann Barnhardt etc. But most who attend Latin Mass would not dare lay a hand on the person of the Pope. Most of us are prevented from that terrible act simply because the lot of us go to confession regularly and kill all sins of thought right then and there so that the sins in thought don't grow into sinful actions.  Calling some one a name doesn't mean your gonna kill the bastard, especially if that person is a Heretical Pope like Francis.

So calling Pope Francis names does not mean that I will get a passport, buy a plane ticket, and fly all the way to wherever the Pope happens to b,e just so I can stand outside his window and throw rocks at him....it's not gonna happen.

Pope Francis is a wicked man, he is a heretic and he doesn't care about preserving the Catholic Faith - he aims to destroy it. So claiming that Pope Francis will somehow find his way into a big house kneeling next to a table with his head buried in his hands, and he was weeping, over lets say - his sins is ridiculous.

Pope Francis contrite of heart is not in the cards.

If anything the Pope in the vision, is a Pope who is defending the Holy Faith, and the wicked outside don't care to go back to the way it was prior to Vatican II. The Pope in the vision probably just abolished the New Mass and called Vatican II for what it is  - a wicked work - that must be destroyed.

Not some contrite Pope Francis feeling sorry for the mess he made all these years - if anything - even if Francis ever came around to his senses he would be encouraged by the very trad bloggers who hurl names at him now.

So Terry Nelson is off.