Our Lady Of La Salette Prophecy On #SainteRita

I take the following report from Steve Skojec a hater of Mealine and La Salette. As I said before Steve wants all the credit for himself so he discredits Melaine. Steve wants to be looked upon as some prophet extraordinaire & leader of Catholic men, and he wants you to pay him for it! And what a better way to make yourself look good, by belittling Melaine!

So read the few words of Melaine and then the many words from King Prophet Steve:

﻿
St. Rita was built in the year 1900 under the direction of the Association of Chapels Catholic and Apostolic (L’association des Chapelles Catholiques et Apostoliques). In 1988, it was made available to Dominique Philippe, the self-designated “archbishop” of a so-called “Gallican” community. Something of a showman, Msgr. Philippe regularly made headlines in France and around the world for his holding annual blessings of pets and various animals – ranging from Cocker Spaniels to Camels – in St. Rita. But for all his Barnum & Baily-esque showmanship, Philippe was not able to attract enough financially supportive parishioners, and when the owners signaled that they wanted to sell the property, the Gallican community was unable to raise the funds to purchase it. Thus, in October 2015, they abandoned St. Rita and the building was slated to be demolished and the property converted into a parking lot. It was at this time that Fr. Guillaume de Tanoüarn, ordained in the Society of St. Pius X (SSPX) and co-founder of the Institute of the Good Shepherd (IBP), began offering the traditional Latin Mass to all who desired it.

It is important to note that the IBP, which offers the Tridentine form of the Roman Rite according to the 1962 Roman Missal, is in full communion with the Holy See and is growing rapidly in France: ten years after its founding in 2006, the number of priests in the IBP has grown to more than 30, and the Institute can boast of an equal number of seminarians. It is governed by the same regulations as more familiar Institutes and Fraternities dedicated to the preservation of Tradition, such as the Priestly Fraternity of Saint Peter (FSSP) and the Institute of Christ the King Sovereign Priest (ICKSP). Contrary to some reports, therefore, it appears that the parishioners who were forcibly evicted from St. Rita were not “Gallicans”, but rather Catholics in good standing with the Church.

While the manner in which the eviction took place is disturbing, what is even more worrisome is the way the evicted Catholics are being portrayed in certain sectors of the French media. One article describes the group as being composed of “fundamentalist militants” and St. Rita under the guidance of Fr. de Tanoüarn as offering safe haven to “the cream of the Parisian far-right” and catering to a combination of “traditionalist Catholic splinter groups and far-right pseudo-revolutionaries.” Various accusations are being leveled against the group, such as having strong ties to Action Française (AF), a right-wing political movement which was condemned during the reign of Pius XI in 1926, only to be rehabilitated by Pius XII in 1939. The modern AF is monarchist, anti-Communist, anti-European Union and pro-immigration reform. Given such a program, it should come as no surprise that the AF does, indeed, resonate with the younger generation of traditional Catholics. 1P5 More >>>>>>> 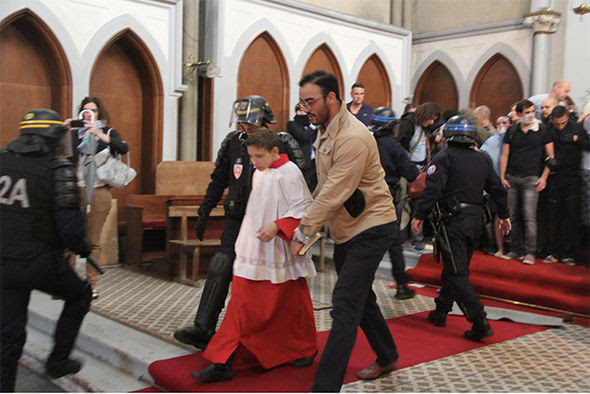