Mélanie Of La Salette On The Birds That Fell From The Sky In Boston: It Will Rain With A Fearful Hail Of Animals....... 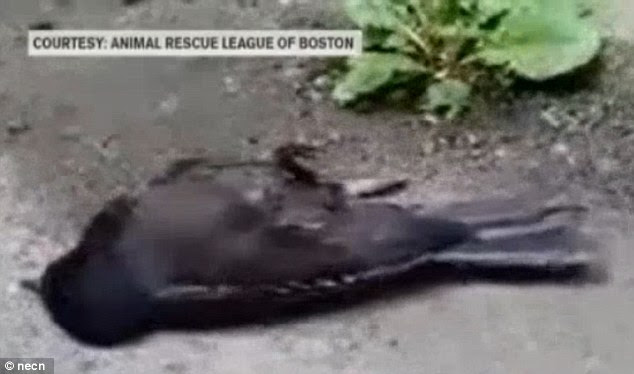 Woe to the inhabitants of the earth! There will be bloody wars and famines, plagues and infectious diseases.Our Lady of La Salette 19 Sept. 1846 (Published by Mélanie 1879)

Oh. Mélanie did say FEARFUL & she did say ANIMALS - We have not gotten to that point yet.

But can you imagine when cows horses and goats etc....fall from the sky in great numbers?

So here is latest on animals falling from the sky:

Fowl play? Dozens of birds fall from the sky and die in Boston, sparking probe into the mysterious deaths

Dozens of birds have fallen from the sky above Boston and died, leaving health inspectors scratching their heads. City health officials are investigating what caused a total of 47 birds, 12 of which were saved by animal rescuers, to become ill and die suddenly. The Animal Rescue League of Boston says it went to Bakersfield Street in Dorchester on Thursday after reports the birds - mostly grackles - were dying.   It was not just birds that were impacted by the mysterious illness, with one cat also becoming sick and having to be euthanized.  Investigators are looking at all potential possibilities, including a fast-acting virus, environmental poisoning or whether the birds could have been killed deliberately, according to NECN.    Daily Mail Read More>>>>>>>>