Mélanie On Muslim Invasion Of Europe: Churches Will Be Locked Up Or Desecrated. 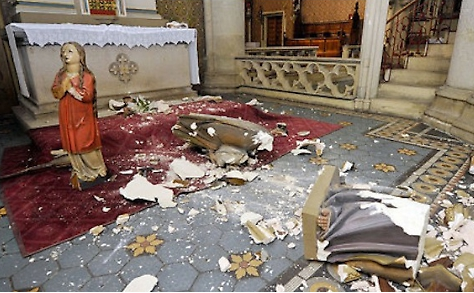 What Muslims are doing in our churches: Thousands of raids every year
There have also been recent cases (mainly reported in local newspapers but occasionally even in national newspapers) of Muslims going into churches, shouting, cursing and smashing sacred objects. However this alarm is not limited only to Italy. As an article in ‘Venerdi’ of Repubblica reports, also Spain, France, Belgium and Germany are targets. Some alarming news comes precisely from one of the German ‘lands’, North Rhine - Westphalia, where over the past three years 3,504 raids of desecration have been recorded. These consist of acts such as: the spitting on sacred images, defecating on the altars, urinating in the holy water fount, desecrating the Eucharist, insulting the faithful and the burning and shattering of sacred images and bookstands. Bishops in Catholic countries with a strong Muslim immigrant presence, had to order their parish priests to hide the Consecrated Hosts to prevent at least the Blessed Sacrament from being desecrated. [Source] Translation: Contributor, Francesca Romana RC