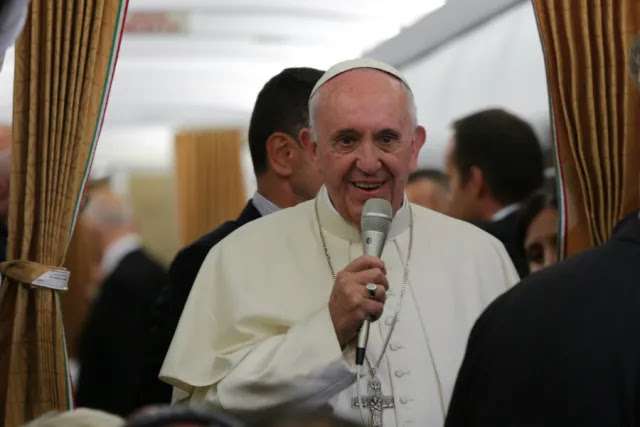 The people are SOVEREIGN!

Not The Holy Roman Emperor!


John Jeremiah Sullivan, New York Times Magazine: Holy Father, as you know the United States is nearing the end of a long presidential campaign that has been very ugly and has received much attention in the world. Many American Catholics and people of conscience are struggling with how to choose between two candidates, one of whom diverts from some aspects of the Church's teaching and the other of whom has made statements vilifying immigrants and religious minorities. How would you counsel the faithful in America and what wisdom would you have them keep in mind next month when the election occurs?

Pope Francis: You pose me a question where you describe a difficult choice, because, according to you, you have difficulty in one and you have difficulty in the other. In electoral campaigns, I never say a word. The people are sovereign. I'll just say a word: Study the proposals well, pray and choose in conscience. Then, I'll leave the issue and I speak of a fiction, because I don't want to speak to this concrete issue. When it happens that in whatever country here are 2, 3, 4 candidates that no one likes, that means that the political life of the nation perhaps is too politicized but perhaps it doesn't have that much politics. And,one of the jobs of the church, also in the teaching in the (university) faculties, is teaching to have political culture. There are nations, and I'm thinking of Latin America, which are too politicized. But, they don't have political culture. They are from this party, or this one or this one. Effectively, (they are) without a clear thought on the foundations, the proposals. More>>>>>

Pope Francis made this declaration during his flight flying above 29,050ft (15 cubits above the Mountain Tops)  which for all of you who don't care, is the boundary established by the SOVEREIGN Lord that:

1. the waters of the Deluge did not exceed during the time of Noe,
2. nor will the fires of the final conflagration exceed at the end of days when the fire rises up from the bowels of the earth to cleanse the world of sin.

The elements of Water and Fire obey the SOVEREIGN Lord

BECAUSE MAN IS SOVEREIGN!

Now go out and VOTE!