Two Lesbian Nuns Who Just Got Married Walk Into A Bar....

Two Lesbian Nuns who just got married walk into a bar, Pope Francis is behind the bar, serving drinks, when he notices the newlywed Lesbian Nuns, he walks over to the pair of love birds and says in a very loud voice...."WHAT IS THIS SOME KIND OF JOKE!"

Pope Francis was 'saddened' when he heard two former nuns had married each other in a secret civil ceremony in Italy, a Vatican official has revealed. The women, known as Sister Federica and Sister Isabel, tied the knot in Pinerolo, near Turin on September 28 after falling in love during a mission in West Africa. They have since revealed they decided to follow their hearts after hearing the Pope's comments on gay people in 2013 when he famously said: 'Who am I to judge?' But far from being happy about the union, Vatican Deputy Secretary of State Archbishop Angelo Becciu said the Pope, 79, was left visibly upset. Daily Mail Read More>>>>>>>>>> 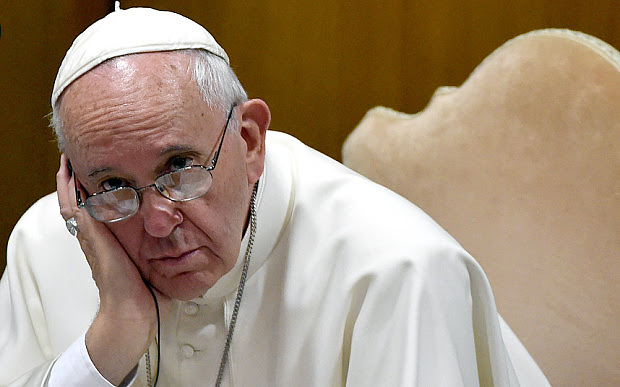