“At the first blow of His thundering sword, the mountains and all Nature will tremble in terror, for the disorders and crimes of men have pierced the vault of the heavens Our Lady of La Salette 19 Sept. 1846 (Published by Mélanie 1879)

What's going on in Russia?

This marks the 100th anniversary of the Russian Revolution.

Russia's Kambalny Volcano erupts for the first time since Catherine the Great gave asylum to the Jesuits.

Pope Francis is a Jesuit.

It has yet to be announced that the Pope plans to visit Russia this year. But the possibility exists for a trip:

ROME—One of the Vatican’s most legendary and accomplished diplomats, as well as the cardinal who announced the name of the Catholic Church’s new chief shepherd to the world on March 13, 2013, believes Pope Francis could become the first pontiff to visit Russia and China. “Yes … perhaps, but there are many nuances to consider,” said French Cardinal Jean-Louis Tauran during an encounter with Spanish journalists in Madrid on Wednesday. Source 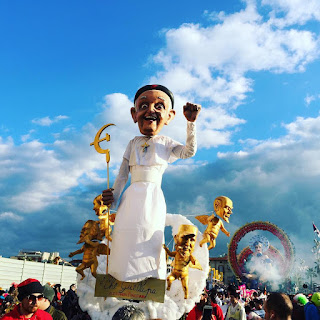 Our lady warned that Russia will spread her errors:

To save them [poor sinners who are on the road to hell], God wishes to establish in the world devotion to My Immaculate Heart. If what I say to you is done, many souls will be saved and there will be peace. The war is going to end; but if people do not cease offending God, a worse war will break out during the reign of Pius XI. When you see a night illumined by an unknown light, know that this is the great sign given you by God that He is about to punish the world for its crimes, by means of war, famine, and persecutions against the Church and against the Holy Father. To prevent this, I shall come to ask for the consecration of Russia to My Immaculate Heart, and the Communion of Reparation on the First Saturdays. If My requests are heeded, Russia will be converted and there will be peace; if not, she will spread her errors throughout the world, causing wars and persecutions against the Church. The good will be martyred, the Holy Father will have much to suffer, various nations will be annihilated. In the end, My Immaculate Heart will triumph. The Holy Father will consecrate Russia to Me, and she will be converted, and a period of peace will be granted to the world. Source