This is Rad Trad Ann Barnhardt's advice in wake of the Mandalay Massacre:

Oh, one last thing. You don’t have NEARLY enough long guns and ammo. You should get on that IMMEDIATELY. Ann Barnhardt

Yea, that's right 59 dead and over 500 injured and one thing on Ann's mind is to go out and buy more guns!

This is just one of the 42 weapons of the Mass Murderer Stephen Paddock: 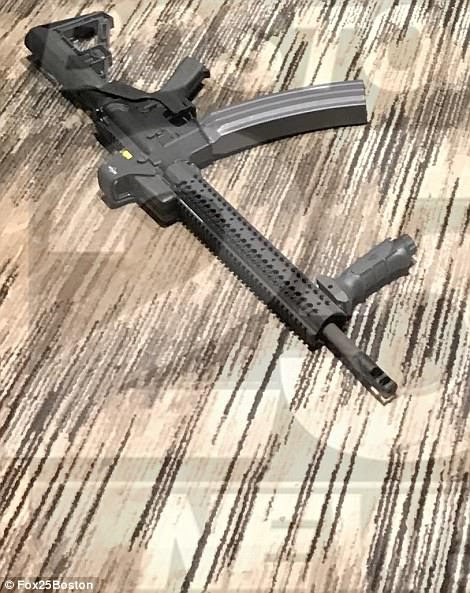 Photos have emerged of two of the 23 rifles found inside Las Vegas shooter Stephen Paddock's hotel room, which he used to rain down death on a crowd of 22,000 attending a music festival on Sunday. The startling pictures, obtained by Boston 25, show two semi-automatic AR-15-style assault rifles. One appears to have been modified with a 'bump stock' that would essentially render if fully automatic - allowing Paddock to unleash hundreds of rounds per minute. The weapon also has a holographic sight and an over-sized magazine, meaning that the multi-millionaire shooter would have been able to fire in longer bursts than usual before refilling. The other weapon pictured has branding showing it to be made by Daniel Defense, a Savannah, Georgia-based company which produces variants of the AR-15 rifle, which is based on the US Army's M16. That weapons also has a bi-pod attached for stability and a telescopic lens for firing accuracy. One of the rifles is seen next to a full magazine, dozens of spent bullets and a hammer - which the 64-year-old shooter allegedly used to shatter two windows in the room before starting his massacre. Paddock opened fire on the Route 91 Harvest Festival just after 10pm Sunday night, killing at least 59 and injuring 527. It took police 72 minutes to zero in on Paddock's hotel room on the 32nd floor of the Mandalay Bay Hotel and Casino across the street from the festival. They say he had cameras set up in the hallway so he would know when authorities arrived. Paddock continued to fight even as police breached his room - firing through the front door at officers. But by the time the SWAT team finally made it into the room, Paddock had killed himself.  Daily Mail