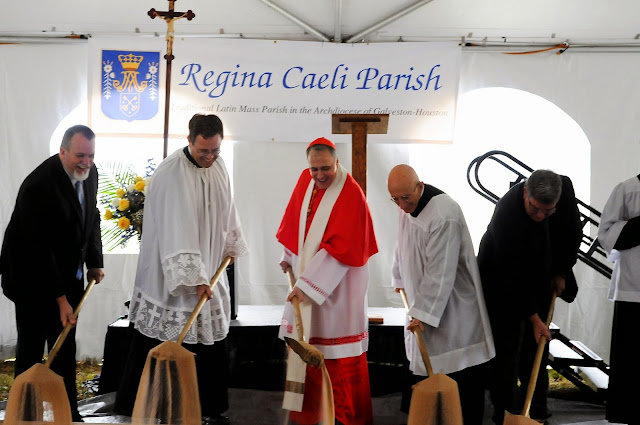 We are excited to announce that we have broken ground for our new Traditional Latin Rite Parish in Houston, Texas: Regina Caeli, the Houston apostolate of FSSP. We were particularly honored that His Eminence Daniel Cardinal DiNardo presided over the blessing of the grounds and the ceremonial groundbreaking. Source

“We stand in unity with you in this time of terrible tragedy — as you stand on holy ground, ground marred today by horrific violence,” said Cardinal Daniel DiNardo of Galveston-Houston, president of the U.S. Conference of Catholic Bishops. Source

I guess in the mind of Cardinal Daniel DiNardo there is no difference between a heretical Baptist Church and the Traditional Latin Rite Parish - they're both HOLY? WHAT?

Full press release below on the Traditional Latin Rite Parish:

On Saturday, December 20, over 200 faithful joined His Eminence Daniel Cardinal DiNardo and Fr. Charles Van Vliet, FSSP in a site blessing and groundbreaking ceremony celebrating the start of the first phase of construction of Regina Caeli Parish. Regina Caeli is the first parish in the Archdiocese of Galveston-Houston in over 40 years that is devoted exclusively to the Traditional Latin Rites. The new parish will be located on a 40-acre rural site in northwest Houston near Fairbanks North Houston Road.

The first building to be constructed will be St. Athanasius Chapel/Hall, which will seat 350 and serve temporarily as the main church for the parish. When funds are gathered to complete the rest of the parish campus, St. Athanasius will be converted for use as a parish hall.

The groundbreaking was held in a tent set up for the purpose. The ceremony followed a day of heavy rain that left much of the site a quagmire. Cardinal DiNardo quipped that it was more like the “parting of the Jordan” than the breaking of the ground! Following the opening prayers and a recitation of the Litany of the Saints, His Eminence intoned the blessing of the grounds, calling on God to “…bless, consecrate and protect from devilish infection these acres…” In his remarks, he noted that St. Athanasius was a great Doctor of the Church whose defense of the Nicene Creed caused him to be exiled from his See in Alexandria no less than six times.

The parish, named for the Queen of Heaven, is the Houston Apostolate of The Priestly Fraternity of St. Peter (FSSP), a society of apostolic life of pontifical rite formed by Pope St. John Paul in 1988. Cardinal DiNardo extended an invitation to the FSSP to serve Catholics in the Archdiocese devoted to the sacraments as celebrated according to the Latin liturgical books of 1962. With the gracious permission of Fr. Paul Lockey, the apostolate has operated out of St. Elizabeth Ann Seton Parish since Fr. Van Vliet’s arrival in September 2011. Regina Caeli was formally erected a parish on the Feast of the Assumption, August 15, 2013.

Fr. Van Vliet thanked all who made this day possible, most especially His Eminence Cardinal DiNardo, Betty Lee White, who donated the land, Fr. Paul Lockey, pastor of St. Elizabeth Ann Seton Parish, and the faithful.