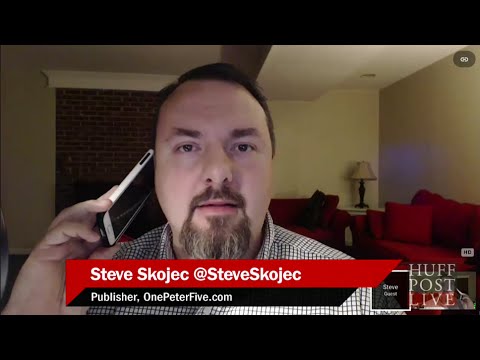 The following comments are because Stevie spread another lie about the Pope:

Bernadette Hays • 18 hours ago Pope Francis 'What are 'YOU' doing?? You ARE NOT doing the work of Our Lord! Many Catholics ARE confused with YOUR actions, and many are leaving the Catholic Church because of YOU.

Michael Dowd • 2 days ago Pope Francis is not only acting like the devil, he is looking like him, i.e, shifty, angry, suspicious, ingratiating, duplicitous.

Gildaswiseman • 2 days ago This papal award is an utter disgrace and a further example of the betrayal of the Catholic faith from the top down.

Barry • 2 days ago A genuine question: Whom do you serve? Really, who DO YOU really Serve, Worship, and Adore?

Fr. RP Mod ArthurMcGowan • 3 days ago AND no matter what is said, PF definitely knew, he is a Peronist, and he is a micromanager to the last detail. Which is something that his proponents laud him for. He Knows.

Jacques Dumon • 3 days ago We should not forget that all people who are actively and publicly promoting abortion are excommunicated ipso facto latae sententiae. Then the Pope just awarded an excommunicated woman by a prestigious Catholic Order. And nobody cares in the Church. "Humanly speaking the Church is lost"


João Pedro AflowerofStTherese • 4 days ago As the supreme ruler of the Catholic Church, he's the first and foremost responsible for this! If he had any decency, he would resign on the spot!

RodH AflowerofStTherese • 4 days agoThe Pope is not a moron. He actively supports the secularist work of the UN. He promotes Agenda 2030. The Vatican was fully informed of the previous iteration Agenda 21. They have been at this for many years. There is no confusion. Doesn't matter what his personal "beliefs" are. All this is happening under his watch and with his awareness. He owns it all.

Billy Chickens • 4 days ago It is not the Catholic Church that recognizes Ploumen with this honor, but rather Pope Francis himself who recognizes her contribution to supporting his own personal leftist agenda. In other words, if the roles were reversed and he was a layman, he would be doing what she is doing - raising money and forming NGOs for the promotion of abortion and homosexuality. So basically he is awarding himself. She is his mirror image. The result is Francis subliminally saying: "I award ME!"

cs Billy Chickens • 3 days ago But Pope Francis is not just a laymen, he is the Pope, the leader and defender of the One, Holy Catholic Apostolic Church. His recognition of Ploumen is scandalous beyonds words for the Catholic Church. Old Bergoglio is not just a leftist.......if only he were. He is so much more than that......He is awarding Satan.

Therese • 4 days ago And so is my thinking: This Pope is a terrible "vicar" of Christ's church on earth. I do not believe he is being led by the Holy Spirit of God.

Ivan mi je ime Therese • 4 days ago If the whole world says he is being led by the Holy Spirit, I say, and keep saying, he is NOT!

Parrish • 4 days ago The souls of future generations are endangered by this man and his sycophantic followers. Have we no significant group of Catholics to combat him and call him out. Most seem subservient, or in agreement, with his program.

Aqua Parrish • 4 days ago Emma Bonino is perhaps the worst mass murderer in the history of the world. Specifically picked for honors and laud by the “pope”. His choices are consistent.

ranger01 • 4 days ago Another week, another disgraceful act by the bishop of Rome. Do not waste a heartbeat on what this man says or writes or preaches. Simply observe his actions. His actions tell all. Bet on it.


RodH Nicolas Bellord • 4 days ago Catholics: This lewd old wretch will die relatively soon. When he does and his corpse is rotting in the dirt of Vatican Hill, the problems will not be dead and moldering with him. To the watching world, Bergoglio IS the Catholic Church. It is up to us to replace him with Jesus Christ

Aqua • 5 days ago Time to take a stand fellas. This is the big one.

Michael • 5 days ago Francis is truly EVIL. How any person of good will is unable to see that is beyond me. My only possible answers to that are that 1.) they too are evil and are part of the act, or 2.) they have been subdued by Francis' demonic influence and are simply in a sort of daze. I'm told that can happen sometimes- that otherwise good people sort of go into a fog in the presence of evil and seem indifferent or complicit. I think I remember reading somewhere that Hitler had that effect. Anyway, what a strange time we live in that the Pope is an enemy of the Faith.

standtall909 Michael • 5 days ago Quite sickening eh? This is one aspect that wrenches my insides, how ANYONE who calls themselves a Catholic can ever defend this guy??!! At this point he is indefensible......TOTALLY.