For those that have been following this PTA DOOM here how it works:

All Three DOOM events took place within days of each other involving three modes of transportation:
Wow more Planes Trains And Automobiles DOOM? When will this end?

A South Korean aircraft slipped and crashed during take-off on Tuesday at Singapore's Changi Airport, the country's civil aviation authority said.  The aircraft was part of the Black Eagles, an aerobatic team belonging to the South Korean Air Force, which was set to perform a flying demonstration at the Singapore Airshow.  At about 1:24 p.m. HK/SIN, the aircraft "skidded and crashed into the grass verge" at the side of one of the runways, and caught fire, the Civil Aviation Authority of Singapore said in a statement.  The pilot was being treated for "light injuries," the civil aviation authority said. Meanwhile, the affected runway was closed until further notice. Source

Tragedy-prone Amtrak suffered another terrifying setback Tuesday — when a high-speed Acela train broke apart as it raced north toward Penn Station at 125 mph, sources said.  In the third wreck in just one week — and the fourth in two months — several cars of an Acela Express heading from Washington, DC, to the Big Apple decoupled at about 6:30 a.m. and were left held together only by their air hoses.  Sparks flew from dragging cables and the train jerked wildly, but none of the 52 terrified passengers aboard were injured, according to reports.  “Someone could have been walking through the train when that happened and fell to their death,” one source said.  A photo taken by an Amtrak worker shows the connector between two coupled trains broken and separated, with a six-foot gap between them.  “There was a lot of sparking and smoking at the head of the train and a lot of bouncing around,” a source said.  The train separated in Maryland about 50 miles north of Baltimore. One passenger was playing on his phone when he felt his car shake suddenly and then saw sparks outside his window.  Source 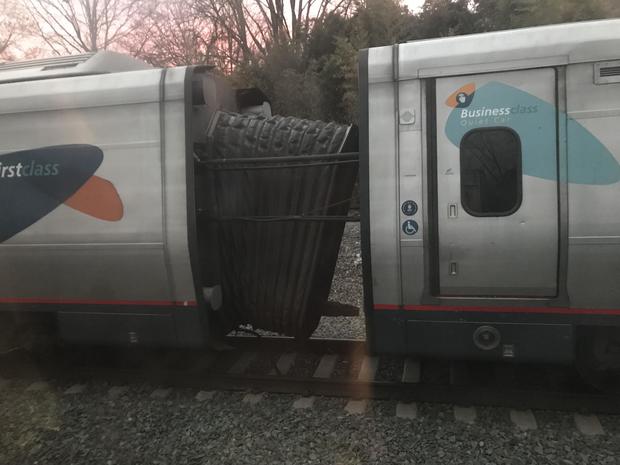 Massive car pile up in Missouri: