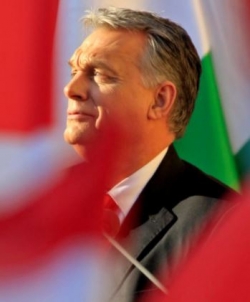 Nationalist Matt is an idiot.....


Hungary's Constitution already begins with these words: "We are proud that our king, Saint Stephen, built the Hungarian State on solid ground and made our country a part of Christian Europe more than a thousand years ago." The preamble to the Constitution declares: "We recognize the role of Christianity in preserving nationhood..." After yesterday's sweeping victory, Fidesz, Orban's party, now has the power to change the Constitution with an even more pro-Christian, pro-life, pro-family, pro-nation bent. From the diabolical European Union and the wrath of the United Nations, O Lord deliver Hungary Source

Rory Donnellan • a day ago Mr Orban and his government will likely receive a very hostile reception from Pope Francis for his failure to welcome mohammedan militants!

clintoncps • 2 days ago A sign of hope. The anti-human horrors of abortion, euthanasia, and homo-transsexualism, like three heads of a single ferocious dragon, must be cut off. I pray that this new government will go at least some way toward doing that, and toward re-Christianizing the younger generation through the advancement of moral laws and cultural renewal.

Robert Drumm • 3 days ago Unfortunately, despite the assertion of its Christian Heritage, only 33% of young adults in Hungary claim to have any religion (compared to 83% of young Poles. https://www.zerohedge.com/n...

Remnant Moderator . Robert Drumm • 3 days ago Of course, it was under Soviet domination for a long time---which almost completely obliterated Christianity. 33% is miraculously high.

Henry Ptak Remnant Moderator • 2 days ago Agreed - I'll take that 33% of COMMITTED Christians in Hungary (or anywhere else, for that matter) any day of the week. You can do a lot of good with a group that size, especially with a government that makes no attempt to hinder their efforts. God bless and protect Mr. Orban and the Hungarian people.

DMill • 3 days ago I was so glad to see Orban triumph. May God bless him and protect him, and may his message bring the EU tyranny down in whimpering heap. Meanwhile, the Demo-soviets and their blood-brother Republican globalists are doing their damnedest to overthrow Trump and thereby overthrow nationalist efforts in this country--and they may succeed. This fight against the beast is indeed global and it will likely be waged in the streets before it is over.