Our Lady Of La Salette On Those 10,000 Lightning Strikes That Hit Ireland Just Days After Voting For Abortion...

“All the civil governments will have one and the same plan, which will be to abolish and do away with every religious principal to make way for materialism, atheism, spiritualism and vice of all kinds. Our Lady of La Salette 19 Sept. 1846 (Published by Mélanie 1879)

There will be thunderstorms which will shake cities, earthquakes which will swallow up countries.Our Lady of La Salette 19 Sept. 1846 (Published by Mélanie 1879)

“The great chastisement will come, because men will not be converted; yet it is only their conversion that can hinder these scourges. God will begin to strike men by inflicting lighter punishments in order to open their eyes; then He will stop, or may repeat His former warnings to give place for repentance. But sinners will not avail themselves of these opportunities; He will, in consequence, send more severe castigations, anxious to move sinners to repentance, but all in vain. Finally, the obduracy of sinners shall draw upon their heads the greatest and most terrible calamities.Our Lady of La Salette 19 Sept. 1846 (Published by Mélanie 1879)

Many people were rumbled from their sleep last night as thunder and lightning hit the southern areas of the country. The humid weather resulted in thousands of lightning strikes throughout the night, with thundery downpours affecting counties in Munster and Leinster. The ESB is reporting this morning that a number of areas are experiencing power outages as a result of the lightning. People were sharing their pictures and videos on social media last night and caught some great shots as the lighting streaked across the sky.In the UK, there were also reports of intense storms and 15,000 to 20,000 lightning strikes. As a result, a number of flights have been cancelled at Stansted airport, with passengers advised to check with their airlines before heading to the airport. Met Éireann is forecasting more warm, humid weather with some thundery downpours today and temperatures could hit 20 to 23 C. A Status Yellow rainfall warning for Munster, Dublin, Carlow, Kildare, Kilkenny, Laois, Longford, Wexford, Wicklow, Offaly, Westmeath, Meath, Galway and Roscommon is die to end at 12pm this afternoon. Source

Don't worry this is just the beginning....

The Two Popes Have to die first.... 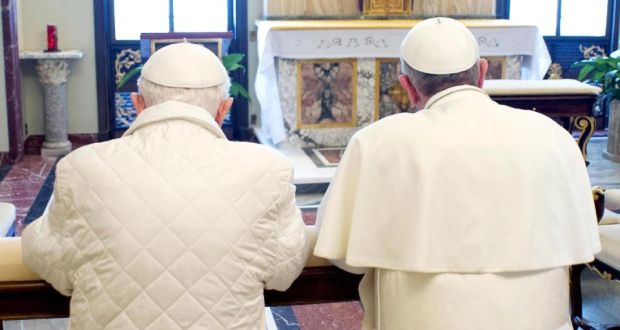 God will begin to strike men by inflicting lighter punishments in order to open their eyes.........