Rad Trads Skojec & Archbold Use The Prophecy Of Anne Catherine Emmerich To Prove That The New Mass Is PAGAN! 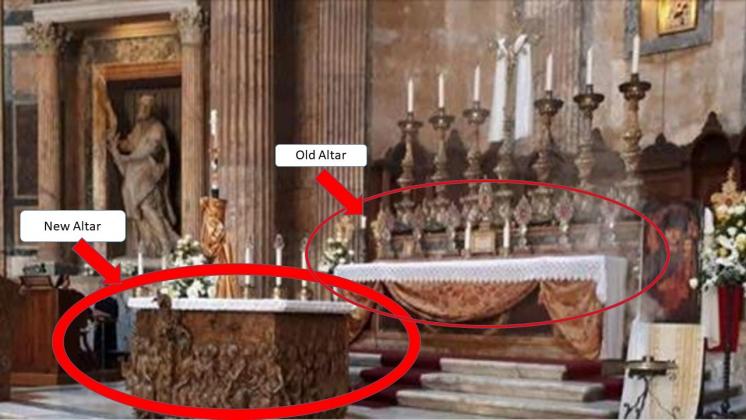 “When I had witnessed this vision even in the smallest details, I saw again the present Pope and the dark church of his time in Rome. It seemed to be a large, old house like a town hall with columns in front. I saw no altar in it, but only benches, and in the middle of it something like a pulpit. They had preaching and singing, but nothing else, and only very few attended it. And lo, a most singular sight! Each member of the congregation drew an idol from his breast, set it up before him, and prayed to it. It was as if each man drew forth his secret thoughts or passions under the appearance of a dark cloud which, once outside, took some definite form.” Source

We are lead to believe by Skojec that this vision is fulfilled today in the Basilica Santa Maria ad Martyres: “I saw no altar in it, but only benches, and in the middle of it something like a pulpit. They had preaching and singing, but nothing else, and only very few attended it.” – Bl. Anne Catherine Emmerich Source

More cutting and pasting from Anne Catherine Emmerich to prove that the New Mass is Pagan:

“The most singular part of it was that the idols filled the place; the church, although the worshippers were so few, was crowded with idols. When the service was over, everyone’s god re-entered into his breast. The whole church was draped in black, and all that took place in it was shrouded in gloom. Then I saw the connection between the two Popes and the two temples. Source

We are further lead to believe by Skojec that since the above vision of the Pagan Temple is in fact a vision of present day Basilica Santa Maria ad Martyres it is therefore a vision of ALL Masses said in the Ordinary form where a TABLE is used instead of an Altar.

Outside of the  Prophecy Of Anne Catherine Emmerich we now have concrete proof that the New Mass is Pagan because according to Skojec & Archbold the Basilica Santa Maria ad Martyres has apparently been turned into a pagan Temple because a Table/Altar has been bolted to floor:

"The Basilica announces that a “Delegate of the Holy Father, His Excellency Mons. Angelo De Donatis, Vicar General of the Diocese of Rome” will perform the Dedication of the new permanent “fixed” bronze altar for the facilitation of versus populum worship.  When?  May 13, 2018, of course." Source

Skojec is so bold as to claim that NO SACRIFICE takes place in the Basilica Santa Maria ad Martyres because a TABLE has been bolted to the floor and the High Altar is no longer in use.