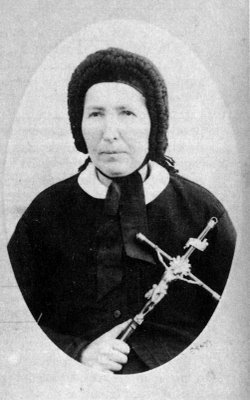 One Peter Fiver Skyliner has only two comments on DISQUS and both comments are found on Skojec's:

Playing With Fire: Rosica, Francis, and the Spirit of the Antichrist

Both Skyliner's comments are attacking the Message of La Salette published 1879.

The leader of the One Peter Fivers is Skojec.

Why does Skojec and crew hate Our Lady of La Salette?

Because they recognize themselves in the message.

What I find interesting is that Skojec and crew deny that there will be a Forerunner to the Antichrist prior to the manifestation of the actual Antichrist.

Why would anyone deny the coming of the Forerunner to the Antichrist?

Well because one day they will find themselves in the camp of the Forerunner to the Antichrist.

Here is what Our Lady of La Salette said about the coming Forerunner:

Notice that the Forerunner is politically a Nationalist.

Most Rad Trads including Skojec are Nationalists.

These poor souls know nothing else other than political Nationalism.

Skojec denies that he is a Nationalist - but all his political solutions to the world's ills only involve casting a ballot in a democratically held election for politicans who are right leaning Nationalists. There is no other political plan for men like Skojec. For them its all about casting a ballot for a Nationalist politician who has the same moral and economic views. It doesn't matter if the politican is a Catholic. Trump is a perfect example. Skojec and his ilk always claim that the restoration of all things in Christ comes about only by casting a ballot. That's their plan...

The ballot box will save them

Nationalism will save them.

So that's the main reason why men like Skojec hate our Lady of La Salette - because the 1879 Mesasge mentions the Forerunner to the Antichrist and his Nationalist Army.

Skojec and crew will continue to attack Mélanie.

For their punishment in attacking La Salette Skojec and crew will one day find themselves in the Nationalist Army of the Forerunner to the Antichrist.

Here are the two comments by Skyliner attacking La Salette:

Skyliner jfd998 a day ago
Thank you for saying this. There is so much false information via false prophecies that give folks false hope. I think there is every possibility that Jorge Bergoglio is the False Prophet of scripture. The commenter who mentioned that Sr. Lucia said the Third Secret is contained in the Apocalypse is correct. Chapters 8-13 speak of the rise of the antichrist. We are all so squeamish about calling a spade a spade. One question, when you mention Our Lady's apparitions in the 19th Century, are you referring to La Salette? What many do not know is that the writings from those apparitions were placed on the Index from which they have never been removed. We need to be careful.

Skyliner jfd998 21 hours ago
This is where I got this bit of insight: http://www.arcaneknowledge....
"The apparition of the Virgin Mary witnessed by Maximin Giraud and Melanie Calvat at La Salette on 19 September 1846 has been one of the more controversial ecclesiastically approved private revelations, in part because there is so much misinformation regarding the content of the message imparted to the children. Some of this misinformation was propagated by Melanie herself in her later years, most infamously in an 1879 tract that was placed on the Index of Prohibited Books, yet still enjoys popularity among traditionalist publishers misled by the imprimatur of the bishop of Lecce. Those who have only casual knowledge of the story of La Salette may easily mistake this extravagantly embellished apocalyptic narrative as the true content of the revelation, leading some to believe in a false apocalypse, while others understandably reject La Salette altogether as unworthy of belief.

To correct these common misunderstandings of the message of La Salette, it is essential to return to the original accounts, in their various versions, and distinguish the primitive version from later embellishments. This has become possible for the first time in over a century, thanks to the rediscovery of the original secrets submitted by the children directly to Pope Pius IX in 1851. We will compare these authentic secrets to other versions that appeared over the years, and explain the relationship of these to the originals, thereby constructing a documentary history of the revelations of La Salette."

What problem does the One Peter Fiver Skyliner have with the La Sallette as published in 1879?

Notice that the One Peter Fiver Skyliner does not tell us what:
Just attacks - nothing else.

Skoje'c attacks on Mélanie will continue

Oh and I will post any attacks on the 1879 Message detailing the errors found in the Message by any of Skojec's foolish followers.

I doubt any of the One Peter Fivers will post any errors of the 1879 Message of La Salette.