Our Lady Of La Salette VERSUS RAD TRADS Making Death Threats Against Clergy On One Peter Five Blog..... 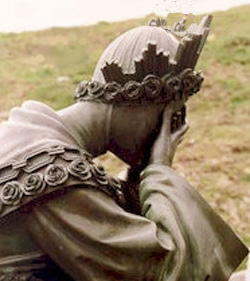 Hey are there any prophecies about RICO cleaning house?

Just Priests being hunted down and made to die a cruel death.

Here read the Rad Trad hatred for the Clergy found on One Peter Five:

DoWhatever_HE_TellsYou • a day ago It’s convenient if all of them scurry to Rome. Much easier to just wipe them out.

George Orwell DoWhatever_HE_TellsYou • a day ago I am starting to think the hand of chastisement will not be the Muslims but the US. Can you imagine a RICO investigation going into full swing. They will question and indict hundreds of Cardinals and Bishops and could even indict Bergoglio. If they can bring down the mob they can take out the false church. Along with this could be massive seizure of assets and the destruction of entire diocese. The good will indeed suffer with the wicked.

Timothy J. Williams George Orwell • 21 hours ago If it is the only way to reform the Church, I say DO IT! I would rather hear Mass from the mouth of a holy priest in a forest than in a guilded cathedral from the mouth of these perverts. 31

JMC susanna • 2 hours ago . This is the prophesied purification of the Church. Purification is often painful; think of the lancing of a boil, or the cauterizing of a wound with a hot iron, which both seals and sterilizes the wound.

JMC Borghesius • 2 hours ago And at the same time, Cdl. Vigano had to flee for his own life after having his report published. He did it knowing he was in danger, but he could not stand by when he had testimony to give. God bless him for aiding the Purification!

Roderick Halvorsen • a day ago No joking meant, but rather, very seriously; If Wuerl turns up in the Vatican, I say the US government should issue an ultimatum to extradite him or risk economic sanctions and military action if the Pope truly stonewalls {pun intended}.

Rocío Matamoros Roderick Halvorsen • 18 hours ago Really, Roderick, are you fantasizing about the U.S. Air Force levelling the Vatican to the ground? They're welcome to take out the Paul VI Audience Hall, but St Peter's Basilica?

Ivan mi je ime Roderick Halvorsen • a day ago Hmmm, I try to imagine the US army against the Swiss guard...

Timothy J. Williams Ivan mi je ime • a day ago The Swiss guard are Catholics. I cannot imagine them accepting orders from Bergoglio much longer.

cs Roderick Halvorsen • a day ago They are snakes running and hiding about, trapped in their dungeon. And the louder they rattle the quicker they are identified and destroyed once and for all.

Christian West Roderick Halvorsen • 17 hours ago I am hoping for a Manuel-Noriega-style end to this.

JMC Roderick Halvorsen • 2 hours ago I think the US government - or ANY government, really (except a Muslim one) would hesitate to take military action against a state that doesn't even have a military of its own (the Swiss Guards who are there specifically to protect the person of the Pope don't count).

Much more found on Skojec's site...