DOOM For Fr. John Zuhlsdorf! Bishop Morlino Dies 90 Days After Issuing Statement On VIGANO! Fr Z. Will Have To Look For A New Home...... 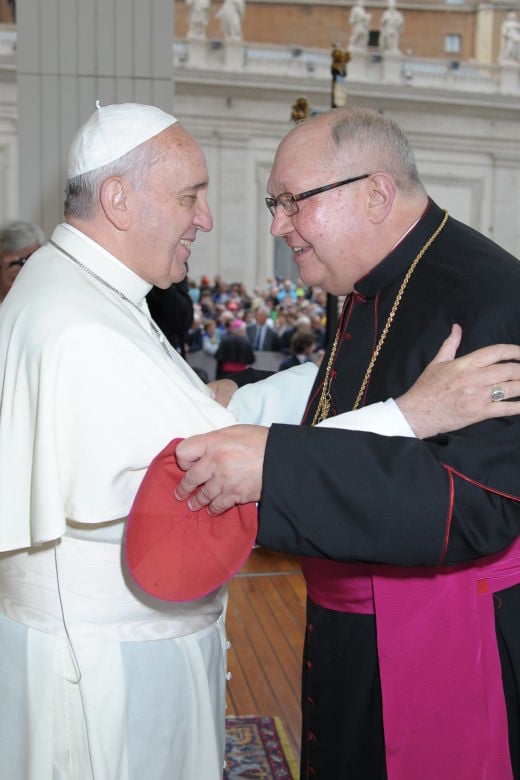 Ninety days ago the Bishop issued his statement on the Vigano controversy:


Statement from Bishop Robert C. Morlino of August 27, 2018, regarding ongoing sexual abuse crisis in the Church

(Madison, WI)) In the first place, I would like to affirm my solidarity with Cardinal DiNardo and his statement on behalf of the USCCB, particularly in two respects: 1) In his statement, Cardinal DiNardo indicates that the recent letter of Archbishop Carlo Maria Viganó, former Apostolic Nuncio to the United States, “brings particular focus and urgency” to the examination by the USCCB of the grave moral failings of bishops. “The questions raised,” Card. DiNardo says, “deserve answers that are conclusive and based on evidence. Without those answers, innocent men may be tainted by false accusations and the guilty may be left to repeat the sins of the past.” 2) And, Card. DiNardo continues, “we renew our fraternal affection for the Holy Father in these difficult days.”

With those convictions and sentiments, I find myself completely in solidarity.

However, I must confess my disappointment that in his remarks on the return flight from Dublin to Rome, the Holy Father chose a course of “no comment,” regarding any conclusions that might be drawn from Archbishop Viganò’s allegations. Pope Francis further said expressly that such conclusions should be left to the “professional maturity” of journalists. In the United States and elsewhere, in fact, very little is more questionable than the professional maturity of journalists. The bias in the mainstream media could not be clearer and is recognized almost universally. I would never ascribe professional maturity to the journalism of the National Catholic Reporter, for example. (And, predictably, they are leading the charge in a campaign of vilification against Archbishop Viganò.)

Having renewed my expression of respect and filial affection for the Holy Father, I must add that during his tenure as our Apostolic Nuncio, I came to know Archbishop Viganò both professionally and personally, and I remain deeply convinced of his honesty, loyalty to and love for the Church, and impeccable integrity. In fact, Arch. Viganò has offered a number of concrete, real allegations in his recent document, giving names, dates, places, and the location of supporting documentation – either at the Secretariat of State or at the Apostolic Nunciature. Thus, the criteria for credible allegations are more than fulfilled, and an investigation, according to proper canonical procedures, is certainly in order.

I might add that my faith in the Church is not shaken in the least by the present situation. Similar situations, and worse, have occurred in the past – though perhaps not in these United States. It is time for us to renew our conviction in that final article of the Nicene Creed: Credo… et unum, sanctam catolicam et apostolicam Ecclesiam, which literally translated means, I believe the Church, as one, holy, catholic and apostolic. The Church is the body of Christ and, as yesterday’s Gospel reading put the question, “Lord to whom shall we go, you alone have the words of eternal life?”

May our Blessed Mother, the Mother of the Church, and Mother of Bishops and Priests, intercede for us, along with St. Michael the Archangel, as we continue our battle against the ancient foe. Source

Pope Francis is going to appoint a new Bishop.......

Maybe the Pope will give it to Fr. Z.

Bishop Morlino & Fr. Z.
How Many Guns Is Fr. Z Packing Under His Vestments?