RAD TRAD Ann Barnhardt's DELETED Post On J.R.R. Tolkien Sodomy Adventure: Who is the Hobbit? You Are!

Oh boy the stench of Sodomy in places where you never expected it....

Seems that J.R.R. Tolkien's priest Son is a Sodomite who buggered little boys.

Who taught Fr. John Tolkien the nasty art of Sodomy?

One of J.R.R. Tolkien's literary friends?

Who is the Hobbit? You Are!

The Petition enjoining the faithful Synod Fathers to walk out of the clearly-fixed Synod was not drafted with the expectation of a glorious victory, culminating with Bergoglio, having submitted his resignation after accepting that the Synod Walkout was a vote of no-confidence, boarding a plane back to Buenos Aires for a life of prayer and penance, shriven and contrite.

We know that our earthly numbers are minuscule relative to the Army of Orcs, the corrupted and twisted men of this age, pagans – both unbaptized and baptized.

But what we are called to do in these dark days is to march on the Black Gate and refuse to parley – in Newspeak, “dialogue” – with them.

We come not to treat with Sauron, faithless and accursed, but to set the terms, which are nothing less than this: total and unconditional surrender to Jesus Christ the Sovereign King.

Knowing that the Freemasonic cult creed is the worship of man, and knowing full – well that the response to our terms will be total war – the throwing open of the Black Gate and the unleashing of the host of hell, both demons and men, upon us, we walk open-eyed into the trap, with courage, but small hope for ourselves.

Who is the “one little hobbit” that the entire host of hell is fixated upon, and who we, with our critiques and our satires and our mocking of the Enemy, are trying to buy time for, and who the enemies of Christ desperately want us to believe is already lost?

Who is the hobbit? You are.

If, by our little actions here, we can plant the seeds of the Truth of Christ, like scattering mustard seeds, so that just one person, when heresy is proclaimed from Rome, which we know it will be; when desecration of the Eucharist is encouraged by Casa Santa Marta, and we know that it will be; when the Law of Non-contradiction is held up as a sign of black-hearted reprobation, and we know that it will be; and when Jesus Christ is expected to apologize to men for His previously Pharisaical and unevolved judgmentalism, and we know that He will be; perhaps just one person will be able to overcome the Cult of Bergoglio and say, “No. I know that is not true. I know the sound of The Good Shepherd’s voice, and that is not it.”

We also know that we have an entire Army behind us, namely the entire host of the Church Triumphant. This is an Army which the Enemy forces give every indication that they do not believe in.

Finally, we know that the One Little Hobbit for whom we fight is not alone. With him goes The True Suffering Servant, not some despicable, conniving counterfeit trying to usurp Him.

And with that knowledge, we know that the War is not only winnable, but has been won for all eternity.

And so we say, “Certainty of death. Small chance of success. What are we waiting for?” 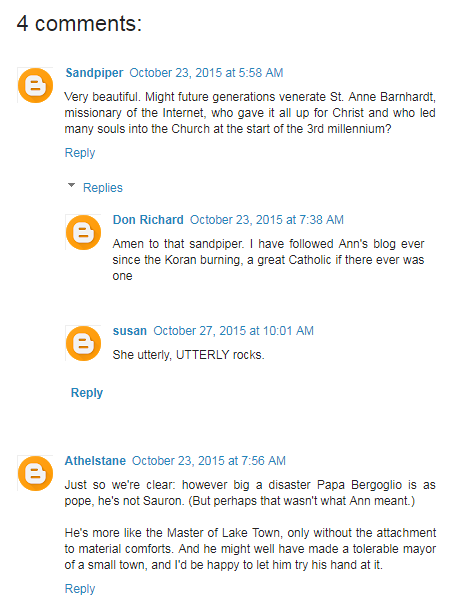