Catholic Parents Of Boy Who Killed Himself Blame Everyone But The Boy & Themselves! Linda And Jeff Hullibarger Blame The Priest Fr. LaCuesta And Blame The Football Coach Jeffrey Wood For The Death Of Their Son! Not only do these bad parents blame the Priest, now they blame the football coach - who will they blame next for the death of their son?


These two Apostate Catholics will either:

A football coach who had been asked not to attend the funeral of a teenage boy who killed himself earlier this month has been fired for ignoring the family's wishes, attending the service and then taunting them on Facebook after being asked to leave. Jeffrey Wood showed up at Maison Hullibarger's funeral in Detroit on December 8 despite the teenager's parents specifically asking him not to through a friend. They have accused him of 'bullying' Maison and their other children. It remains unclear whether his alleged treatment of Maison contributed to his decision to take his own life or why it was unfair. But after showing up at the funeral and being asked to leave, the coach, who is also a history teacher, took to Facebook where he taunted the boy's grieving parents. 'I was just asked to leave a funeral by a family member of a deceased football player.   'If you need someone to blame, I’m your man, I’m your fall guy.   Source 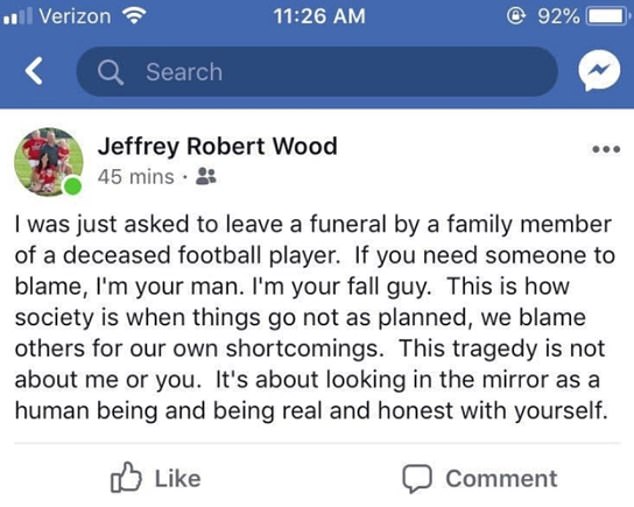