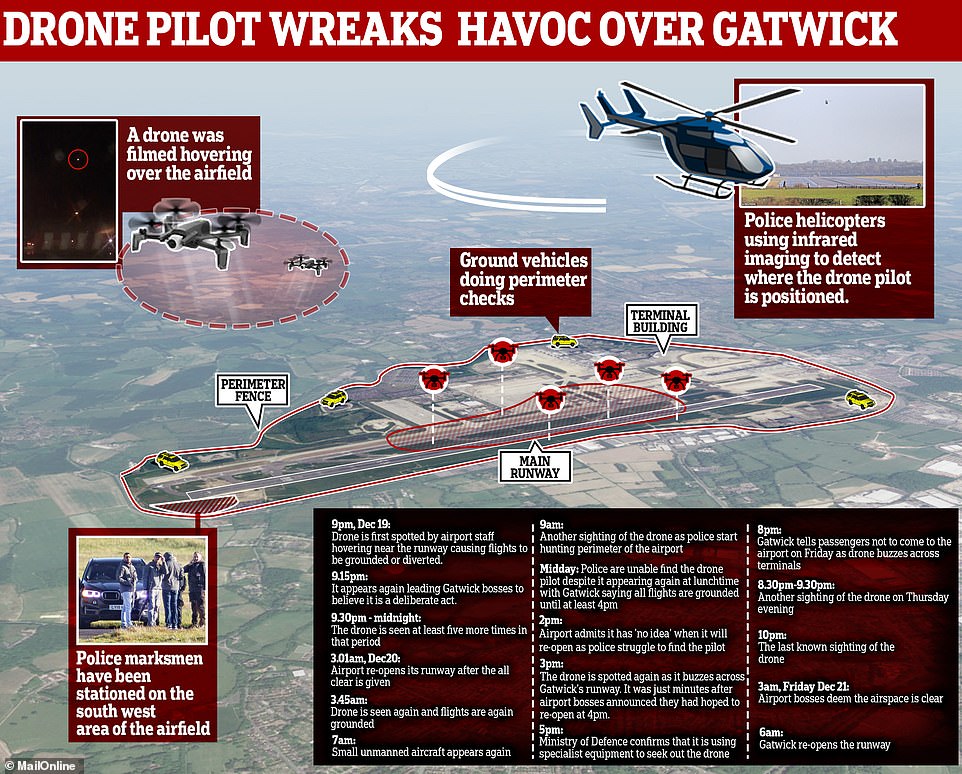 Timeline: How dangerous drone pilot managed to shut down Gatwick

Here is how the chaos has unfolded:

9pm, December 19: Drone is first spotted by airport staff hovering near the runway causing flights to be grounded or diverted.

9.15pm: It appears again leading Gatwick bosses to believe it is a deliberate act.

9.30pm - midnight: The drone is seen at least five more times in that period

3.01am, December 20: Airport re-opens its runway after the all clear is given

3.45am: Drone is seen again and flights are again grounded

9am: Another sighting of the drone as police start hunting perimeter of the airport

Midday: Police are unable find the drone pilot despite it appearing again at lunchtime with Gatwick saying all flights are grounded until at least 4pm

2pm: Airport admits it has 'no idea' when it will re-open as police struggle to find the pilot

3pm: The drone is spotted again as it buzzes across Gatwick's runway. It was just minutes after airport bosses announced they had hoped to re-open at 4pm.

4pm: Drone spotted flying over the runway yet again.

5pm: Ministry of Defence confirms that it is using specialist equipment to seek out the drone

8pm: Gatwick tells passengers not to come to the airport on Friday as drone buzzes across terminals

8.30pm-9.30pm: Another sighting of the drone on Thursday evening

10pm: The last known sighting of the drone hours after Army is deployed

3am, Friday December 21: Airport bosses deem the airspace is clear

6am: Gatwick re-opens the runway

10.30am: Flights are taking off and landing as normal

5.10pm: The runway is closed again after another suspected sighting