The Irreverence And Impiety Of The NEW MASS Didn't Stop The St. Anthony's Shrine, Kochchikade Bombing 'Where is God?' Sri Lankans Stunned After Deadly Blasts 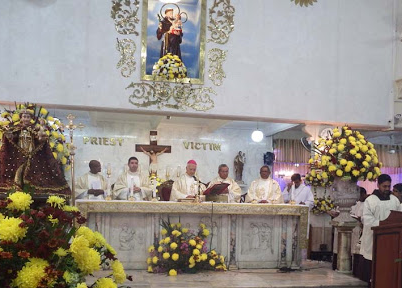 
The priests, ministers of my Son, the priests, by their wicked lives, by their irreverence and their impiety in the celebration of the holy mysteries, by their love of money, their love of honors and pleasures, and the priests have become cesspools of impurity. Yes, the priests are asking vengeance, and vengeance is hanging over their heads. Woe to the priests and to those dedicated to God who by their unfaithfulness and their wicked lives are crucifying my Son again! The sins of those dedicated to God cry out towards Heaven and call for vengeance, and now vengeance is at their door, for there is no one left to beg mercy and forgiveness for the people. There are no more generous souls; there is no one left worthy of offering a stainless sacrifice to the Eternal for the sake of the world. Our Lady of La Salette 19 Sept. 1846 (Published by Mélanie 1879)

'Where is God?': Sri Lankans stunned after deadly blasts

As Shantha Prasad carried children wounded in Sri Lanka's deadly attacks into a Colombo hospital, memories of the country's deadly civil war flooded back. "I carried about eight wounded children yesterday," he told AFP on Monday, a day after a string of blasts hit hotels and churches, killing nearly 300 people. "There were two girls aged six and eight, the same age as my daughters," said Prasad, who helps carry stretchers into the hospital's triage area and wards. "Their clothes were torn and drenched in blood. It is unbearable to see this kind of violence again." For many Sri Lankans, Sunday's attacks against churches and high-end hotels brought back painful memories of a conflict that lasted three decades and killed as many as 100,000 people. During those years, bomb attacks were a regular occurrence, and left many Sri Lankans on edge in the streets and on public transport. Source