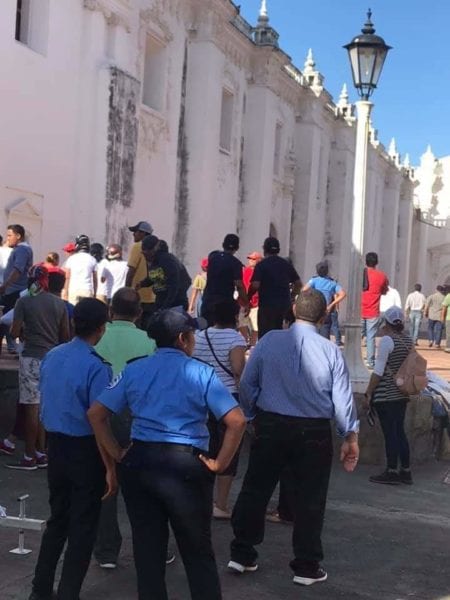 HAVANA TIMES – A dozen people were beaten and wounded on Saturday, June 15th in the cathedral of Leon, after a mob of fanatics of the regime of Daniel Ortega and Rosario Murillo attacked with stones, glass bottles and sticks during a mass for the first anniversary of the murder of Sandor Dolmus, an altar boy of that Catholic temple.Church.

Initially the attackers put up a platform outside the temple.Church, from where they played loud propaganda music of Ortega’s FSLN and later threw stones inside the church. During the attack the doors of the cathedral were closed to prevent the entry of the mob, but at the end of the Mass the National Police burst into the temple.Church.

The Police Chief of Leon, Fidel Domínguez, and bishop Bosco Vivas, persuaded the group of people who remained in the cathedral to leave after promising to accompany them to avoid them being attacked by the Ortega fanatics. However, once a ways outside the church, both the bishop and the Police Chief turned around and left and the mob proceeded to attack the people who had attended the mass.

Yonarqui Martínez, a lawyer who represented several of the political prisoners, denounced the complicity of the bishop and the police with the aggressors, who in addition to beating them stole some of their belongings.

“That gentleman (the bishop) convinced us to leave the cathedral, everyone told us not to trust him, but he told us that if we stayed inside, he would not respond, and he let the police enter. I deduced that when he left he was going to allow the paramilitaries to enter and they were going to kill us. He convinced us to leave, he told us he was going to protect us… we walked with our hands up and then halfway [to our destination], he turned around and left us alone in the hands of the paramilitaries,” Martinez said.

“Ortega’s paramilitaries robbed us, they beat us, I’m not well, but the blows don’t hurt us, it does not hurt that they robbed us, it hurts me that a minister of the church, a priest, gave us [to the paramilitaries] that way… Those people wanted to kill us, not just beat us, you should have seen how they looked for Nahiroby (Olivas) and Byron (Corea), they wanted to kill us,” continued the lawyer.

After the attack, the Inter-American Commission on Human Rights (CIDH) urged through its Twitter account for the State of Nicaragua to guarantee the integrity of the people who were attacked in the Leon Cathedral. “Religious freedom, the right to protest and to memory must be protected by the State,” they added.

Similarly, the Office of the United Nations High Commissioner for Human Rights (OHCHR) condemned “the attack perpetrated by pro-government mobs with the tolerance and acquiescence of the Police against the people who attended the Mass in memory of Sandor Dolmus in the Leon Cathedral.” Source