Our Lady Of La Salette On What Was That Blue Light Over Dallas County? 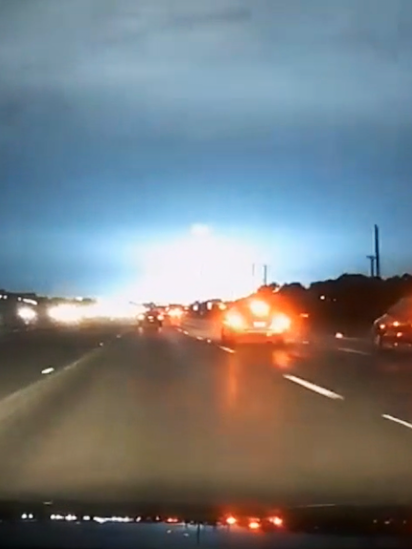 The demons of the air together with the Antichrist will perform great wonders on earth and in the atmosphere Our Lady of La Salette 19 Sept. 1846 (Published by Mélanie 1879)

The FORERUNNER to the ANTICHRIST must manifest himself to the world and build up a NATIONALIST Army first:

“A forerunner of the Antichrist, with his troops gathered from several nations, will fight against the true Christ, the only Saviour of the world. He will shed much blood and will want to annihilate the worship of God to make himself be looked upon as a God Our Lady of La Salette 19 Sept. 1846 (Published by Mélanie 1879)

And this has not happened yet...

A flash of blue light lit up the sky in eastern Dallas County on Tuesday night. A dash-cam video taken by Oliver Mathis driving on Interstate 635 shows the light flash for a few seconds.  People in the area also reported that lights inside their homes flickered around the time of the flash, according to KXAS-TV (NBC5). An Oncor spokesperson told NBC5 that the electricity provider's equipment recognized a “flickering of electricity” in portions of northeast Dallas County at 10:39 p.m., but that no one lost power. There were no reports of transformer explosions, Oncor told the station.  North Texans reported on social media experiencing power surges in their homes, possibly as a result of the flash of blue light.  Thunderstorms moved through portions of North Texas on Tuesday afternoon, but Dallas-Fort Worth was dry, likely ruling out the possibility that the flash came from lightning. Source