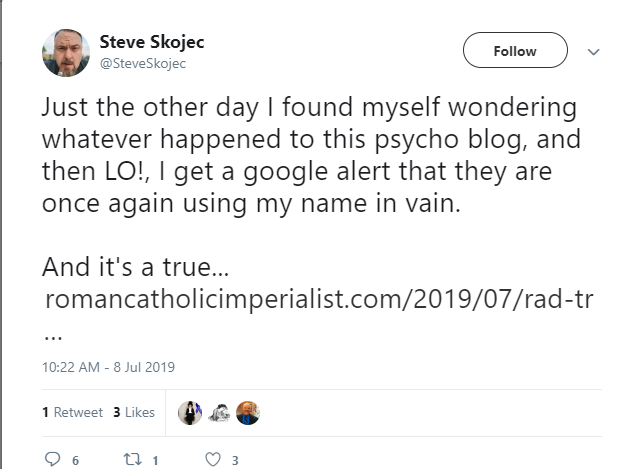 No Skojec you jerk its not your name that men take in vain.

2. Thou shalt not take the name of the Lord thy God in vain.

Oh wait - Steve is being flippant. Steve is mocking the Faith to look hip.

I really hate the New Mass goers who try to be hip by mocking the Catholic Faith - you can listen to these blasphemous Catholics on EWTN, Relevant Radio and other assorted Pro New Mass websites - you can also find this blasphemous style at the New Mass when the priest mocks the life and miracles of the Saints - go ahead and listen carefully to the Priest tomorrow and watch for the mocking etc...I bet everyone laughs too.

Rad Trads like Steve Skojec do the same - they mock the faith to be funny. It doesn't work.

But that's the mind set of those who go from the New Mass to the Latin Mass.

Next Steve (The Mocker of the Faith) Skojec uses an Evangelical Web Site to make a point about God's vengeance: 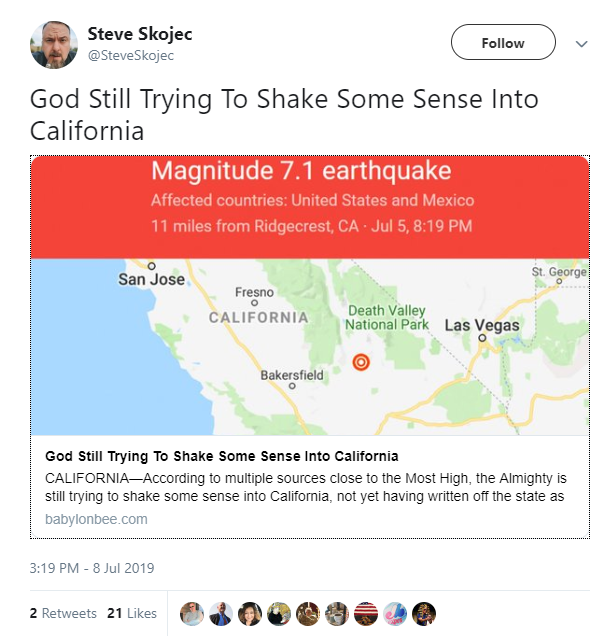 Steve refuses to use the words of Our Lady of La Salette on Chastisements. Because Steve hates Melaine and the Message of La Salette.

Instead Steve relies on a protestant Evangelical website to make a point on God's Chastisements.

So what is The Babylon Bee?

The Babylon Bee is the world’s best satire site, totally inerrant in all its truth claims. We write satire about Christian stuff, political stuff, and everyday life. The Babylon Bee was created ex nihilo on the eighth day of the creation week, exactly 6,000 years ago. We have been the premier news source through every major world event, from the Tower of Babel and the Exodus to the Reformation and the War of 1812. We focus on just the facts, leaving spin and bias to other news sites like CNN and Fox News. If you would like to complain about something on our site, take it up with God. Unlike other satire sites, everything we post is 100% verified by Snopes.com. Source

Satire from Protestant Evangelicals is not needed.

But I wouldn't be surprised if a bunch of demented Evangelicals were actually mocking God's ability to Chastise men.

No Roman Catholic Layman should subject himself to such Evangelical nonsense, but many Rad Trads have no problem with wallowing in such Evangelical filth - after all according to Rad Trads  like Skojec and his ilk - political ecumenicism with non-Catholics is allowed  - they just condemn the religious kind that Pope Francis engages in.

So Skojec is a damn fool for going to Evangelicals for Chastisement analysis.

A faithful Catholic believes in God's ability to Chastise men and believes the words of Our Lady of La Salette on the coming 35+ years worth of Chastisements - weak men like Skojec believe in nothing of the sort.

For instance when God chastises men I use a devotion to the Holy Name - the JESUS PSALTER and  I post it here on this blog every month so that Catholics can make repreation for the sins commited against the Holy Name:

How Many Days In JULY 2019 Before There Is A Need To Pray JESUS PSALTER? FOUR! Patron Saint Of San Bernardino ALLOWS 6.4 MAG EARTHQUAKE To Hit San Bernardino County......Blaspheming Hollywood Stars Freak Out...  July 05, 2019

How Many Days In JULY 2019 Before There Is A Need To Pray JESUS PSALTER? FIVE! Patron Saint Of San Bernardino ALLOWS 7.1 MAG EARTHQUAKE To Hit San Bernardino County......SECOND QUAKE HITS CALI... July 06, 2019

This is how a Catholic should respond to God's Chastisements - but mockers like Steve don't get it.