G.K. Chesterton Two Ton Saint Was Soooo Fat He Washed Himself With A Rag On A Stick! Drummel/ Ahlquist War of Words

Food
he “[d]idn’t care for salads or vegetables” and ate mainly meat and potatoes.

Hygiene
Hygiene and severity were two of Chesterton’s pet peeves. He had received an undisciplined, indulgent upbringing from his parents, who did not insist on even basics of cleanliness and self-care. Good friend Christopher Hollis said Chesterton was unable to perform “the normal achievements of daily life—such as dressing or shaving himself—others had to do these things for him.”

Smoking
Chesterton would smoke cigars, lighting a new one from the old one, until the room was a dense fog. He also smoked cigarettes until there was a ring of cigarette butts around him, what Chesterton described to friend William Titterton as “the fatal clues of my bad habit of smoking.” Pulmonary problems followed him throughout his life.

Booze
drinking while writing. Maisie Ward was something like Chesterton’s Boswell, a long-time friend with access to a host of his other friends in writing her 1943 biography. “[I]ntimate friends” told her Chesterton “had come to depend, ‘almost absent-mindedly’ one said, on the stimulus of wine for the sheer physical power to pour forth so much” writing

Somewhere towards his late 50’s, Chesterton began drinking again. In the marriage of Gilbert and Frances, Ward called alcohol “the deepest—perhaps the only deep—problem for them both.” It was a battle “against the real danger that [Chesterton] might again drink too much, as he had before the illness that so nearly killed him in 1915.”

Exercise
In regards to physical exertion, Hollis said Chesterton “quite frankly loathed” it. H.G. Wells had difficulty trying to get Chesterton to take an occasional walk. Chesterton once rejoiced when he sprained an ankle because now “nobody could bother him to take exercise.” 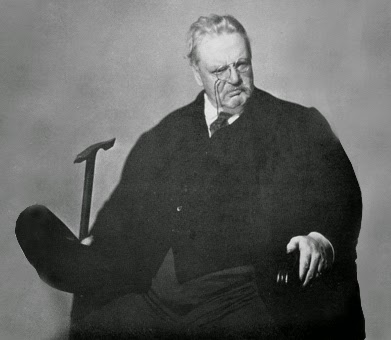 Virtue
His goodness drew other people to him, made him one of the most admirable figures of his time, made would-be enemies into friends, and made people change their own lives. That goodness still has the same effect almost 80 years after his death. It exudes from his writings. One cannot read a lot of Chesterton without the firm realization: “A good man wrote this.”


Spiritual life
Chesterton should be counted not only among the great mystics, but among the saints.

Here is the grave of the two ton saint of a man: 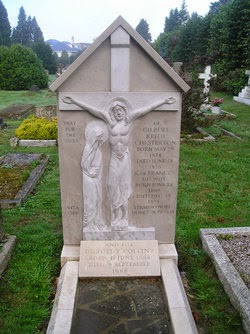 Two Tons Of Rotting Flesh Fit In The Grave?

A couple of things - the grave of the two ton saint will soon be vandalized by his Nationalistic crazed followers. Why? Curiosity. Chestertonians want a relic or two and want to see if his remains are truly in the grave. Because of the girth of the man some speculate he is not buried in the above grave. The gave is in the Catholic Cemetery at Beaconsfield England.

Here is a prayer composed by his followers asking for his canonization:

God Our Father, Thou didst fill the life of
Thy servant Gilbert Keith Chesterton with a
sense of wonder and joy, and gave him a faith
which was the foundation of his ceaseless
work, a charity towards all men, particularly
his opponents, and a hope which sprang from
his lifelong gratitude for the gift of human
life. May his innocence and his laughter, his
constancy in fighting for the Christian faith in
a world losing belief, his lifelong devotion to
the Blessed Virgin Mary and his love for all
men, especially for the poor, bring
cheerfulness to those in despair, conviction
and warmth to lukewarm believers and the
knowledge of God to those without faith. We
beg Thee to grant the favours we ask through
his intercession, the end of abortion in this
Country [and especially for……] so that his
holiness may be recognized by all and the
Church may proclaim him Blessed. We ask
this through Christ Our Lord. Amen.
Catholicgkchestertonsociety.co.uk
Goodcounselnetwork.com

Now I do have questions about a man who was so fat - how did he get to Mass everyday? How is a fat man like GK Chesterton gonna genuflect? Where are the comments or observations made by first hand witnesses and others about GKC inside a Catholic Church during Mass - did anybody notice GKC levitating during the Elevation of the Body and Blood of Christ during Mass?

Did the church kneelers give under his massive weight.

Fat men I know don't kneel because they can't. Wouldn't GKC have had the same problem as fat men do today during Mass? Yes - so it would of been noticeable to others the doings of GKC during Mass.

But I bet GKC hardly went to Mass because of his "problems" and this is the reason for the silence on GKC mass attendance.

Again - don't expect any spiritual "miracles" from the 2 ton saint rather look for the political upheavals to follow his canonization.