VIENNA, Austria, December 3, 2019 (LifeSiteNews) ― More than 120 people answered a young Catholic hero’s summons to pray outside his nation’s most important cathedral while a sacrilegious pro-LGBT event happened inside. Alexander Tschugguel, 26, has released a video in which he described the rosary held outside Vienna’s St. Stephen’s Cathedral on the night of Saturday, November 30. “It was a wonderful evening,” he said. “So many fantastic people were here.” Tschugguel said that more than 120 people assembled and prayed three or more rosaries. They also sang Advent hymns.    The Catholic activist, who became famous in October after removing pagan idols from a Catholic church in Rome and throwing them in the Tiber, was filmed by Gloria TV addressing the crowd in German.     Source


Then This Happens Three Days Later

Three days after the homosex show, Schönborn was hospitalised on December 3, as an emergency, and had to cancel all appointments until Christmas. He is said to have suffered a pulmonary embolism. In March he was treated for prostate cancer. Source 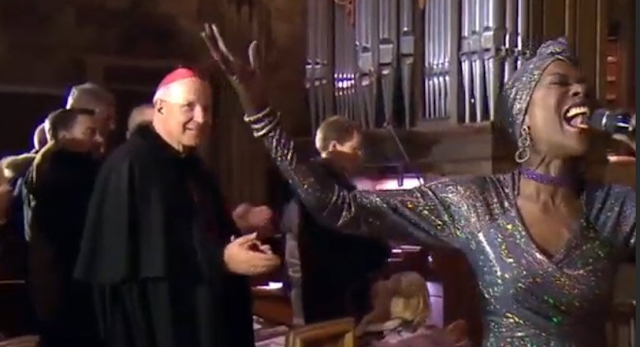 1. The Antichrist shall deny that Jesus is Christ, and for that cause shall impugn all the ordinances of Our Savior, as Baptism, Confirmation, & c. and shall teach that Circumcision is not yet ceases , nor the Sabbath, and the other ceremonies of the Law. I.Joan.2. Who is a liar, but he that denieth Jesus to be Christ? And this is Antichrist, who denieth the Father and the Son?

2. Afterward when he hath persuaded that Our Saviour is not the true Christ, then he will affirm, that he himself is the true Christ, promised in the Law, and the Prophets. Joan.5. If any come in his own name, him you will receive. viz. for the Messias.

3. He will affirm that he is God, and will be worshiped for God.2. Thess.2. so that he sit in the Temple of God, showing himself as though he were God.

4. He will not only say that he is God, but also that he is the only God, and he will impugn all other Gods, that is, as well the true God, as also the false Gods, and all Idols, 2 Thess.2. Who extolleth himself above all that is called God, or that is worshiped as God. And Dan.11. And he will not repute the God of his Fathers, nor care for any o the Gods. because he will rise against all.