Yes, The Priests Are Asking Vengeance, And Vengeance Is Hanging Over Their Heads: Covid Face Mask Wearing Priest Falls Over Dead During Mass 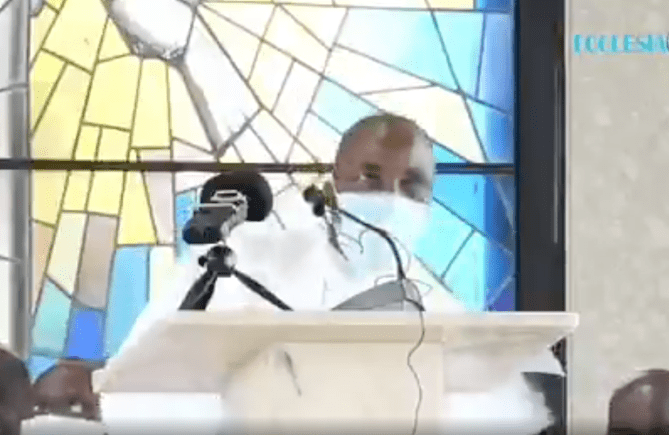 “The Society of men is on the eve of the most terrible scourges and of gravest events. Mankind must expect to be ruled with an iron rod and to drink from the chalice of the wrath of God. Our Lady of La Salette 19 Sept. 1846 (Published by Mélanie 1879)

When Will God Take Vengeance On These wicked Bishops These Wicked Priests?

SHOCKING footage shows the moment a priest in a face mask drops dead in front of his congregation in Cameroon.  The clip was shot as the man, identified as Rev. Fr Jude, was delivering a sermon in the western city of Douala on August 30.  The reverend, who was also the the spiritual director of the country's Catholic Men Association, is seen standing at his pulpit and leading a Sunday mass.  At one point in the address, he pauses and then stops speaking altogether.  His eyes then become droopy and he sways on the spot for a moment before keeling backward and falling to the floor.  Fellow clergymen who had been sat behind him rush forward to help and members of the congregation can be heard screaming. Source


PROPHECY OF MELANIE ON TWO POPES: