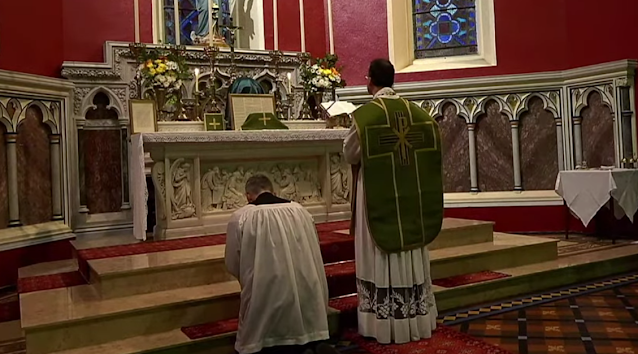 GOSPEL Matt. 13:31-35
AT THAT TIME, Jesus spoke this parable unto them, saying: "The kingdom of heaven is like to a grain of mustard seed, which a man took and sowed in his field. Which is the least indeed of all seeds; but when it is grown up, it is greater than all herbs, and becometh a tree, so that the birds of the air come, and dwell in the branches thereof." Another parable he spoke to them: "The kingdom of heaven is like to leaven, which a woman took and hid in three measures of meal, until the whole was leavened."All these things Jesus spoke in parables to the multitudes: and without parables he did not speak to them. That it might be fulfilled which was spoken by the prophet, saying: "I will open my mouth in parables, I will utter things hidden from the foundation of the world."
Consideration For Sunday


The disciples in the behalf of the people, that understood not the parable, said, why speakest thou in parables? There we may observe, the compassion, and charity the disciples of Christ showed themselves to be true disciples of Christ. For although they for their own part, peradventure understood the parable, or if they had not, yet being domestical, and always conversant with Christ, knew they might ask him, and he would expound it unto them, as he did sometimes: yet because they thought the common people could not understand it, nor have opportunity to ask the meaning thereof, as they might; out of charity, and compassion towards them, that they might not loose so precious a benefit as is the doctrine of Christ: they emboldened themselves, to say unto Christ, why doest thou speak in parables to these ignorant people, who understand thee not? and so much the rather, because Christ had answered them once before to the like question, thus: To you it is given to know the mysteries of the Kingdom of heaven, but to others I speak in parables, that hearing they may not understand; which made them here to expostulate the same with him again.

Oh that we did consider deeply the misery of them, that lose the benefit of instruction in their religion, rather then they will take pains to learn, and ask; and the happiness of them, that are zealous, to have others instructed, as the disciples were. There be some that come to hear sermons as men come to hear music: who attend more to the sweetness of the notes, and harmony, then to the ditty, be it never so good: So some resort to Sermons more to hear the eloquence, & manner of delivery of the preacher, then for the instructions, and edification of their souls.

Others there be that come to hear, and understand the doctrine, and instruction of the preacher more then his elocution or manner of delivery: but as a candle if the wick be wet, will not take fire though you kindle it never so much do these men come with such store of moisture of fleshly affection to the vanities, pomps, and pleasures, of the world, that they take no profit there by: and both these are to pitied as much, as those poor people, that heard the parables aforesaid, and understood them not; And those that are their pastors and preachers are not only to instruct them, but to pray unto God, and expostulate for them, as the disciples here did for the people: not that they may hear and understand, for that they do well enough: but to give them grace to put in practice what they hear, and understand; which if they do not, they are in worse case, then if they understood not at all: for, as Christ telleth us, he that knoweth his Masters will, and doth it not shall be beaten with many stripes in comparison of him that knoweth it not.

That sin, and inordinate love of the world, may aptly be compared to moisture, and they that be possessed with it to moist, and marshy grounds, that are barren, and fruitless, where evil spirits love to dwell; we may learn out of the gospel, where Christ dispossessed one of an evil spirit, and confined him to a dry, and solitary place: where when he could find no rest, he said to himself, I will return to the place where I was before, and so did, where by, it was signified that the devil taketh no rest, or quiet in those that dry up their bodies, and the concupiscence thereof, with prayer, fasting, and mortification, striving thereby to overcome sin, and all inordinate desires of worldly vanities; but in them that live in the moisture, and dirty puddles of sensuality and sin, there he delighteth to dwell, and thither will he go, if he may.