SHIRTLESS PRAYER WARRIOR
RAD TRAD GARY VOIS WOULD BE PROUD
Following up post:
Posted by dxv515 January 16, 2021 RAD TRAD NATIONALIST FR JOHN ZUHLSDORF PERFORMED US 'ELECTION EXORCISMS' WITHOUT BISHOPS PERMISSION!...TIME FOR FR. Z TO MOVE TO ITALY WITH STEVE BANNON.......
Fr John Zuhlsdorf on why he performed the Political Exorcism:
“I have the permission of the bishop to say this, which increases the authority of the praying of the prayer,” he said ahead of his 5 January exorcism which he carried out in Latin. “As exorcists will confirm, the demons are very good with electronic equipment.”  Wearing full vestments, and standing in front of the chapel of his home, which is located in the mid-western state of Wisconsin, Fr Zuhlsdorf told followers why he was carrying out the exorcism. “I think it’s amply clear, there’s enough evidence to demonstrate that there was fraud in some places, and people had to commit that fraud, it didn’t happen by itself. It seems to have been well-organised. I am deeply concerned that anyone involved in this has put their soul in terrible mortal peril,” “We have to be concerned about the people involved in this who might have lied, or who might have committed fraud, concerning this election. This is not cheating to steal the election to 5th grade class president. This is something on a whole different scale, it’s quantitatively so vastly larger, that it’s qualitatively a different kind of a situation and sin. This isn’t like going over and stealing a newspaper off your neighbour’s porch.”  Source 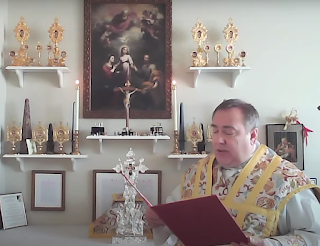 Bishop Hying of Madison statement that he did not give permission to Fr John Zuhlsdorf to perform a political Exorcism:
But Bishop Donald Hying of Madison, who has oversight over Fr Zuhsldorf, disassociated himself from the priest’s actions. “A number of people have falsely concluded that I, as the Bishop of Madison, gave Fr John Zuhlsdorf permission to perform the rite of the sacramental of exorcism in relation to partisan political activity, to those seeking or holding elected office, or to recent developments in electoral politics in our country,” he said in a statement. Instead, the bishop explained, he granted Fr Zuhlsdorf permission to carry out exorcisms “for the intention of alleviation from the scourge of the coronavirus pandemic” for a temporary period. An exorcism is an ancient ritual normally used for people who believe they are possessed by an evil spirit. But it can also be used to exorcise a place, locality or things. A bishop, however, must grant a priest permission to carry out an exorcism. Source
The rotten fruit of the disobedient Exorcism is the Insurrection of the Capitol and this prayer service lead by a self proclaimed Horned Shaman.
Watch the below video starting at 7:40 of the Protestant prayer service lead by a shirtless horned shaman and know that if ever there should be an Exorcism performed, it is in that very Senate chamber where the Protestant prayer service took place. But we know that Fr John Zuhlsdorf will not be allowed to do the Exorcism. Maybe the Senate should find a priest who is obedient to his Bishop to perform the Exorcism.
6 JANUARY 2021
This Protestant prayer service lead by a shirtless horned shaman is the rotten fruit of Rad Trad political ecumenism with lay protestants,
Again you lay Rad Trad influencers are jerks for forcing this demonic political ecumenism on your followers....
Rad Trad Influencer manly man Mr. Ann Barnhardt would be proud of these manly he men prayer warriors..... 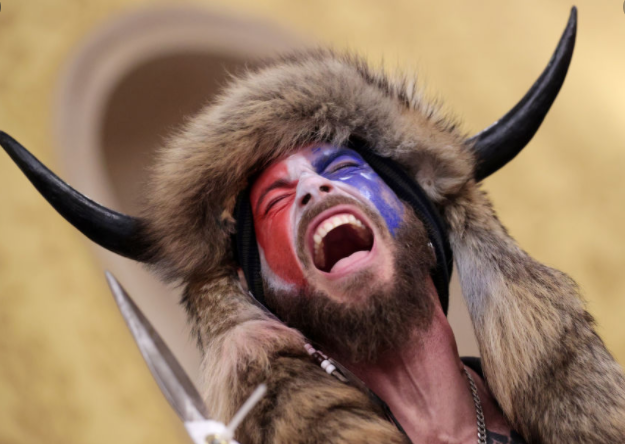 “Children cry, they are noisy, they don’t stop moving. But it really irritates me when I see a child crying in church and someone says they must go out. God’s voice is in a child’s tears: they must never be kicked out of church.” Pope Francis "If your Mass ain't crying - it's dying" Dr. Taylor Marshall Nothing so becomes a Church as silence and good order. Noise belongs to theaters, and baths, and public processions, and market-places: but where doctrines, and such doctrines, are the subject of teaching, there should be stillness, and quiet, and calm reflection, and a haven of much repose. These things I beseech and entreat. St. John Chrysostom These five uncovered ladies behave themselves. No noise Sit in Back No Breast Feeding on display Silent  No disruption from them. The typical covered Rad Trad woman is obnoxious, noisy, rude, irreverent and impious.   At the TradCath E-girl Summit @p8stie @bIiccy @DollPariah @nastiapasta pic.twitter.com/gJHTLkQFCC

Find The GLOCK On The FSSP Rad Trad

WHISKEY ✅ (Or It Could Be A Mandatory Court Ordered Urine Sample) GLOCK PANTS ✅ WIFEY IN KITCHEN ✅ CIGAR  DUMBBELL✅  ASCOT ✅ Looks like the kids are in bed and daddy is having some quiet time alone. Quiet time is something that FSSP Rad Trads never allow others to have when attending the silence of the Holy Sacrifice of the Mass.  You see these insufferable Rad Trad pricks are irreverent and lack all piety when attending the Silence of the Holy Sacrifice of the Mass by allowing their children to run rampant and allowing their babies to scream, cry and wail at very high decibels: "A crying child can expose caregivers and health care providers to sound pressures as high as 120 dB(A), merely 10 dB(A) less than the intensity of noise from an airplane departure. Continuous exposure to this amplitude may cause auditory discomfort, ear pressure, mild pain, and even tinnitus." Many self absorbed Rad Trad pricks really believe that a screaming, crying and wailing baby is part of the r

GO OUT AND GET A JOB Timothy and his brother hate the Latin Mass. Timothy attends exclusively the New Mass. Timothy defends Vatican II as if it were the only Church Council Ever... Tim does not have a job. He wants you to support him. Tim is selling the Catholic Faith on Social Media. So technically Tim is not a FSSP Sect Member but instead is a member of the Vatican II Sect. Tim was  a member of the FSSP sect member and has switched over to the Vatican II Sect.  Tim like the FSSP sect member believe he belongs to the tiny remnant and a Billion Catholics are not part of the One True Church. The Heresy of both Vatican II Sect Members and FSSP Sect Members is to deny that God keeps His promise. Acts of Faith that  Vatican II Sect Members and FSSP Sect Members reject: God forbid, dear Lord, that I should ever think that thou hast broken the Oath, and Testament, which thou didest make to Abraham, Issac, and Jacob, thy servants, saying: By myself I have sworn, I will multiply thee, and I

Follower of Taylor Marshall....... Six British children under five are rescued from Austrian cellar where they were living with 'conspiracy theorist' who had a stockpile of guns and attacked social workers with pepper spray  Six British children under the age of five have been found living in an abandoned wine cellar in Austria, in an illegal hideout with a 54-year-old Austrian said to be obsessed with conspiracy theories, and his wife, 40. The youngsters were discovered in the illegal hideout in the small village of Obritz after police broke in following an incident in which the man allegedly attacked social services with pepper spray. Deputy local mayor Erich Greil said after the discovery that the man once told him he had ten children, and that he wanted 'a cellar for each child'. The man is said to have been a 'Reichsbürger', a group of right-wing extremists who believe the German empire still exists as it did prior to World War II, and the current German

Damian Thompson At The Spectator Calling For The Assassination Of Pope Francis? The Catholic Church Must Free Itself From This ‘Toxic Nightmare’

“The mischievous would attempt his life several times to do harm and shorten his days but neither him nor his successor will see the triumph of the Church of God. Our Lady of La Salette 19 Sept. 1846 (Published by Mélanie 1879) The Catholic Church Must Free Itself From This ‘Toxic Nightmare’ Shortly before he died on Tuesday, Cardinal George Pell wrote the following article for The Spectator in which he denounced the Vatican’s plans for its forthcoming ‘Synod on Synodality’ as a ‘toxic nightmare’. The booklet produced by the Synod, to be held in two sessions this year and next year, is ‘one of the most incoherent documents ever sent out from Rome’, says Pell. Not only is it ‘couched in neo-Marxist jargon’, but it is ‘hostile to the apostolic tradition’ and ignores such fundamental Christian tenets as belief in divine judgment, heaven and hell. The Australian-born cardinal, who endured the terrible ordeal of imprisonment in his home country on fake charges of sex abuse before being acq

Q. How many FSSP Rad Trads carry weapons with them when attending the FSSP Holy Sacrifice of the Mass? A. ALL OF THEM FORERUNNER TO THE ANTICHRIST & THE MAN WHO BANKROLLED HIM PROPHECY OF MELANIE ON TWO POPES: "I didn't see, I don't see any Great Pope or Great Monarch before an extremely great tribulation, horrifying, terrible and general for all Christendom. But before that time, twice there will be a short lived peace;  TWO  shaky, servile, doubtful popes"  Mélanie THIRTY FIVE YEARS OF CHASTISEMENTS:  God will abandon mankind to itself and will send punishments which will follow one after the other for more than thirty-five years.  Our Lady of La Salette 19 Sept. 1846  (Published by Mélanie 1879) FSSP FORMING THEIR OWN CHURCH “Evil books will be abundant on earth and the spirits of darkness will spread everywhere a universal slackening of all that concerns the service of God. They will have great power over Nature: there will be churches built to serve these

George Neumayr Assassinated - Who Is The Next Cigar Smoking Rad Trad To Be Whacked?

And then there were three.... Who's next?