GK Chesterton & Hilaire Belloc Must Of Spent Most Of Their Free Time In Chinese Opium Dens.....

I once read Belloc and Chesterton for several years and spent a lot of money buying their books.
I was fooled into reading their works just like I was fooled into reading the encyclicals of Pope John Paul II
Wasted money and time.
I gave away all my Belloc and Chesterton books. I did keep Servile State.
Both men are a waste of time.
I read Catholic authors from the 16th and 17th century - you know - the Catholics who were actually persecuted for their faith. These men had something to say - something worth reading.
Chesterton and Belloc on the other hand pampered themselves and had nothing to say and nothing worth reading.
I've come to the conclusion that 1/2 Ton Chesterton and Belloc must have spent a lot of time smoking Opium in Chinese Opium Dens.......
Many notable Victorians are known to have used laudanum as a painkiller. Authors, poets and writers such as Charles Dickens, Elizabeth Barrett Browning, Samuel Taylor Coleridge, Elizabeth Gaskell and George Eliot were users of laudanum. Anne Bronte is thought to have modelled the character of Lord Lowborough in ‘The Tenant of Wildfell Hall’ on her brother Branwell, a laudanum addict. The poet Percy Bysshe Shelley suffered terrible laudanum-induced hallucinations. Robert Clive, ‘Clive of India’, used laudanum to ease gallstone pain and depression. Source 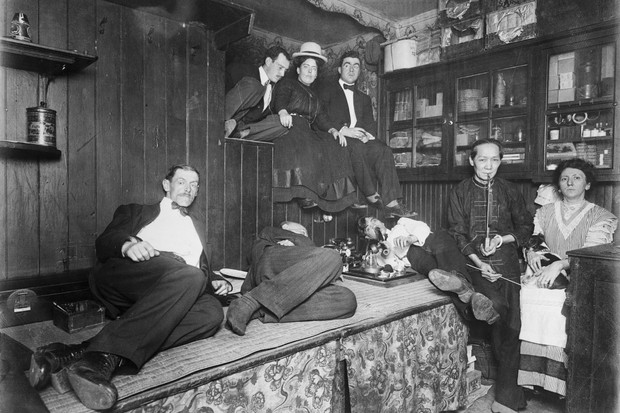