FSSP Ann Barnhardt & Father J. Refuses To Be Abel: Deny Pope Francis Is The Pope And Instead Commemorates Pope Benedict At The Te Igitur In the Roman Canon 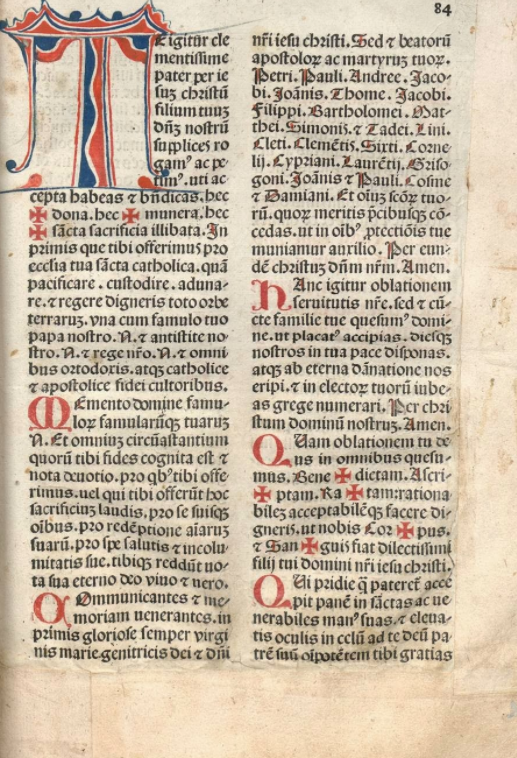 Te Igitur
This seemeth just to us, that the name of Lord the Pope, whosoever shall be for the time in the Apostolic Sea, be rehearsed in our Churches. Alcuinus is in this more plain, saying: them to be separated from Communion, who by any dissension do not frequent the remembrance of the Apostolic Pope, during the sacred mysteries . This is insinuated by the glorious martyr Ignatius: The first honor is due to God, the second to the Bishop, the third to the King. Fr. Henry Fitzsimon 1611
For He Refuses To Be Abel, Who Will Not Bear Patiently The Malice Of Cain. ~  St. Gregory The Great
Another example of FSSP Rad Trads who refuse to be Abel and bear patiently the malice of Cain
Ann and her ilk refuse to believe that Pope Francis is the Pope.
Shows you that Ann is impatient and will not bear the malice of Pope Francis and confirms that she does not bear with the bad, and therefore bears witness against herself that she is not good.
******
Mailbag: Another Traditional Latin Mass priest checks in, and yes, of course he commemorates Pope Benedict at the Te Igitur in the Roman Canon
Dear Ann,
Ave Maria!
I have been a priest for almost 12 years. For over 10 of those years, I have said the name “Benedictus” in the Roman Canon. For about a year and a half, I tried to say “Franciscus” in the Roman Canon about halfway through my priesthood, but it felt wrong. More importantly than “feelings,” your writings and the research of others convinced me about five years ago that Pope Benedict XVI never truly resigned (due to duress and attempts to bifurcate the papacy) and also that the 2013 Conclave subsequently was invalid, first because we had a sitting Pope, and secondly due to obvious illegal activity in said “Conclave.” For this reason, I am 99% that Pope Benedict XVI is our only reigning Pope. Hence, I have said “Benedict” in the Roman Canon of Mass for over 10 of my 12 years of my priesthood.
Because I offer the Traditional Latin Mass, few people hear me say this. However, when I am challenged on this, the challenge usually goes something like this: “You know the consequences of naming the wrong Pope in the Roman Canon, don’t you?”
The answer is: Yes, I do know the consequences of naming the wrong Pope in the Roman Canon. Now, let me flip this question on priests who are not sure who is Pope, but think naming “Franciscus” is the safer option. The very question I want to ask them is the exact same one as the above: “You know the consequences of naming the wrong Pope in the Roman Canon, don’t you?”
Indeed, the consequences of naming a manifest heretic like Bergoglio in the Roman Canon means that you join, in some sense, your faith and the name of everyone mentioned as your Mass intentions to that very Pachamama idolater. You join the faith of the faithful departed named about 60 seconds later (after the Pope is named) in the memento for the dead to a man who denied the divinity of Christ in 2015. You join, in some sense, your own personal faith as a priest to that manifest heretic of an antipope who has denied the Church’s teaching on everything from hell to contraception. Who you name in the Roman Canon is first Christ, Mary and the saints, but also the Pope who, in some sense, you join the faith of all believers in the world to.
While I admit that Pope Benedict XVI had potential material heresies (such as his attempt to bifurcate the papacy) this does not reach the level of what St. Robert Bellarmine mentioned of a Pope losing the office if he promoted “manifest” heresies. Without a doubt, a man sitting on the Chair of Peter promoting manifest heresies would be Bergoglio… that is, if Pope Benedict XVI had resigned validly and if there had been a valid 2013 Conclave. But even if I were wrong about the resignation, and even if I were wrong about the Conclave, I would be sure Bergoglio has lost the Office due to grave and manifest heresy and idolatry.
Yes, I am absolutely sure that the pagan-idol worshipping anti-Pope Bergoglio can not possibly be the Pope. And naming him in the Roman Canon will have dire consequences for any priest who links the faith of the living and dead to that idolater. Yes, indeed, my question back to any and all priests on the fence on who is Pope is exactly what is thrown at me for naming Benedict in the Canon: “You know the consequences of naming the wrong Pope in the Roman Canon, don’t you?”
Your salvation is at stake just as much as mine for naming the wrong Pope, dear priests.
In Jesus and Mary,
Fr. J
Source