Fr. James Jackson
“The priests, ministers of my Son, the priests, by their wicked lives, by their irreverence and their impiety in the celebration of the holy mysteries, by their love of money, their love of honors and pleasures, and the priests have become cesspools of impurity. Yes, the priests are asking vengeance, and vengeance is hanging over their heads. Woe to the priests and to those dedicated to God who by their unfaithfulness and their wicked lives are crucifying my Son again! The sins of those dedicated to God cry out towards Heaven and call for vengeance, and now vengeance is at their door, for there is no one left to beg mercy and forgiveness for the people. There are no more generous souls; there is no one left worthy of offering a stainless sacrifice to the Eternal for the sake of the world.   Our Lady of La Salette 19 Sept. 1846 (Published by Mélanie 1879)


On Saturday, October 30, 2021, at approximately 4:00 PM, members of the Computer Crimes Unit/Internet Crimes Against Children Task Force arrested James Jackson, age 66, of 538 Broadway, Providence, for 1) Possession of Child Pornography, 2) Transfer of Child Pornography, and 3) Child Erotica Prohibited. Mr. Jackson was transported to the Lincoln Woods Barracks for processing. Mr. Jackson was arraigned by Justice of the Peace Crawford who set $5,000 surety bail with the special bail conditions of no unsupervised contact with minors and restricted Internet access. Mr. Jackson was unable to post bail and was transported to the ACI Intake facility. Source 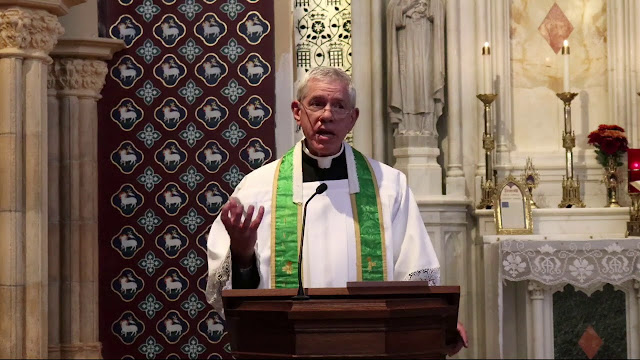 Providence priest arrested, charged with possession of Child Pornography
Providence, RI (WLNE) – Rhode Island State Police announced Sunday morning that they arrested a Providence priest during a child pornography investigation.
Police said they arrested Father James Jackson of St. Mary’s on Broadway on Saturday.
Colonel James Manni said the Internet Crimes Against Children unit, or ICAC, had been investigating the transfer of child porn over the internet. Manni said ICAC traced the internet connection to 538 Broadway in Providence, which is the address of St. Mary’s Church on Broadway. ICAC task force members then served a search warrant at the church and rectory.
According to a news release from RISP, Father Jackson, age 66, was identified as “the owner of digital media allegedly involved in the possession and transfer of child pornography and child erotica”. Father Jackson is charged with Possession of Child Pornography, Transfer of Child Pornography and Child Erotica Prohibited.
Following his arrest, Father Jackson was arraigned by Justice of the Peace Steven Crawford. Father Jackson was given a $5,000 surety bail, along with the conditions that he not have contact with children younger than age 16 and that he have restrictions on internet access. However, RISP said he has not made bail and remains in custody.
If convicted, Father Jackson could face the following punishments for each charge:
The Diocese of Providence released the following statement about the arrest of Father Jackson:
“A priest of the Priestly Fraternity of Saint Peter (FSSP), Rev. James Jackson, FSSP, was arrested Saturday, October 30, by the Rhode Island State Police on charges related to the possession of child pornography. Jackson, who was pastor of Saint Mary’s on Broadway, Providence, has been prohibited from the sacred ministry and the exercise of the office of pastor by Most Rev. Thomas J. Tobin, Bishop of Providence.
Jackson was appointed as pastor of Saint Mary’s effective August 1, 2021. Prior to August 1, Jackson was assigned by the FSSP elsewhere outside the state. Prior to his recent arrival in Rhode Island, the Diocese of Providence was presented a letter of suitability for ministry for Jackson by the FSSP. Saint Mary’s continues to be entrusted to the care of the Priestly Fraternity of Saint Peter, as it has been since June 2018.
The Diocese of Providence applauds the efforts of the Rhode Island State Police and the other law enforcement bodies involved in making this arrest. We look forward to working with law enforcement and the Attorney General to ensure the safety of children.
Bishop Thomas Tobin offered the following statement: “The use of child pornography is a serious crime and a grave sin. The charges against Father Jackson are very disturbing to all and must be taken very seriously. At the same time, I renew my pastoral concern and offer my fervent prayers for the good people of St. Mary Parish during this difficult time.” Source