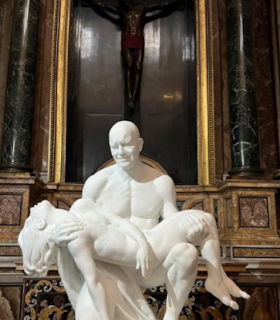 Homosex Church: Vatican’s “Pieta” With Two Entangled Naked Men
Santa Maria in Montesanto Basilica, the church of the "artists" at the Roman Piazza del Popolo, is currently displaying a mockery called “Pietà.” It was produced by self-taught Jago (Jacopo Cardillo), was placed in the Chapel of the Crucifix, and shows a naked man holding another naked man on his lap. Officially, it is labelled a “re-elaboration of a moment of recollection and pain, in which humanity has identified itself for centuries.” The abomination is part of a project called “A door to the inﬁnite.” On social media, the statue is called the “Pieta of Pederasty.” In November 2012, Jago received the Medal of the Pontificate for creating a marble bust depicting Benedict XVI covered by the papal robe. After Benedict's resignation, he modified the original (video down below), depicting Benedict bare-chested and entitling the sculpture Habemus Hominem to express that "the representative of God returned to being a man." Source