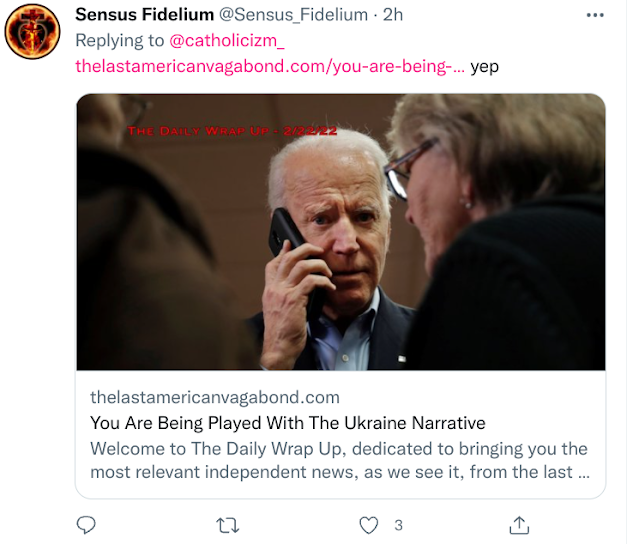 Wow! that didn't take long.......
Unhinged hater of the SSPX layman Steve Cunningham is the first to give the FSSP narrative that the US is to blame for Putin's invasion of the Ukraine.
Steve Cunningham used to be on Mike Parrott's RTF Rundown podcast until just recently - reasons unknown why he left for was asked to leave....
Steve Cunningham is the owner operator of the FSSP funded mouthpiece of all things FSSP YouTube channel - Sensus Fidelium.
As an aside - How many guns/weapons does enraged Steve Cunningham carry on his person when attending the Holy Sacrifice of the Mass at his FSSP Latin Mass Parish?
1. Six?
2. Eight?
3. Twelve?
I'm thinking that Steve has weapons strapped to his body equal to the number of limbs plus 5....I bet Steve  like most all FSSPers makes his wifey carry a Glock or two in her purse.....
I bet there was a lot of celebratory sex last night in FSSP Rad Trad Bedrooms over Putin's victorious Invasion!
Here is the Podcast that Cunningham is promoting
FSSP version of events in the Ukraine: You Are Being Played With The Ukraine Narrative
"Remember you must NEVER EVER blame Vladimir Putin"...FSSP Steve Cunningham