Putin Did This! To All You FSSP Rad Trad Putin Worshipers..... 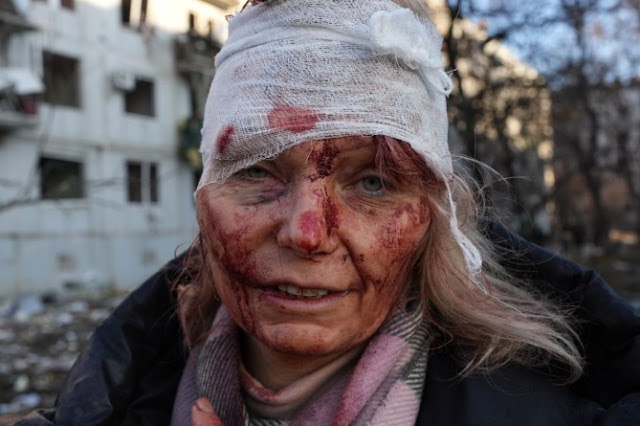 FAKE! FAKE! is what the FSSP gun totting RAD TRAD will say.
How dare you blame the Savior of Western Civilization for committing war crimes in the Ukraine!
Remember back in the day when Michael Matt at the REMNANT NEWSPAPER and the woman at RORATE CÆLI  during the Obama Administration were saying that shirtless Putin was a manly man who is a Savior and is here to save us all!
Remember that?
These sick fucks haven't stopped.
They will spin Putin's invasion of the Ukraine as something necessary - as an act of Mercy etc.
Again these are sick fucks
This is another example why the FSSP should be shut down.
There is something terribly wrong and sinister at the FSSP when you have a bunch of Putin worshipers.
I will post all their Putin nonsense over the coming days.
Also too remember when these sick fucks at FSSP were the ones defending  atrocities of Bashar al-Assad?
So here is what will happen and how FSSPers will spin Putin's atrocities:
Everything that makes Putin look bad in their eyes is FAKE! FAKE! FAKE!
I will also name the usual suspects.....
As an aside to show the mind of these sick fucks - yesterday I posted Florence's new video on Roman Catholic Imperialist -  FLORENCE + THE MACHINE - KING
To these sick FSSP fucks that Florence video is an abomination!
How dare Florence sing she is not a Mother she is not a Bride she is King! Why that is a direct attack on family etc and other such nonsense when in reality Putin is killing men women and children in the Ukraine. Putin is destroying families in the Ukraine.
But never mind that....
Really and truly you have to be a sick fuck to believe such nonsense as these FSSPers do.