Meditation Of The Solitude Of Our Lady The Virgin: And Of That Which Was Done After The Burial Of Her Son. Point I 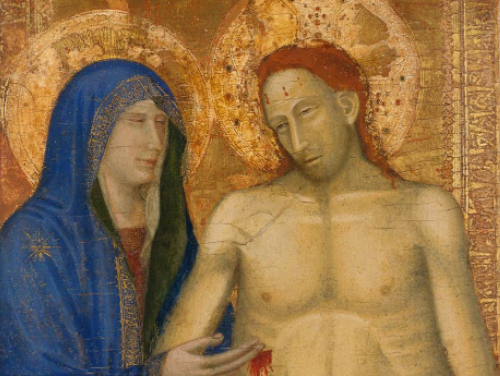 UNKNOWN MASTER, Italian
The Dead Christ and the Virgin
1335-45

Of the solitude of our Lady the Virgin: and of that which was done after the burial of her Son.

1. The office of the burial being finished, the Virgin our Lady, full of new sorrow to see herself left all alone, and to be deprived, not only of her living Son, but also of his dead body, determined to return to her place of rest, accompanied with those noble men, with Mary Magdalen, and with other devout women. Now when they came unto the mount Calvary, the Virgin beholding the Cross of her Son, adored the same she being the very first of all, that gave us example this adoration. O what tender and devout words, then spake she. cheering herself with the Cross of Christ! She bowed herself upon her knees, and lifting up her hands on high began to say. Hail precious Cross, upon whose arms died whom I bore a little infant betwixt mine: more happy was thy lot herein then mine, since betwixt my arms, he began the redemption of the world, but betwixt thine, he did conclude and perfect the same. Blessed art thou amongst all creatures, for that on thee is changed the malediction of guilt, into the benediction of grace: for he died on thee, to the end he might give life unto the world. Hail o noble tree of life, by whose fruits, all men may obtain eternal life. I adore thee, as his image, who is the image of the invisible God, and who extended his arms and feet hanging on thee, that he might renew the image, which Adam had blotted out by his sin. With these or the like words, the Blessed Virgin adored the holy Cross, and those others which went with her, did the same in imitation of her.

2. Secondly consider, ho in the way this Lady walked with great care and wariness, for fear to tread under her feet the blood of her Son, which she knew to be the blood of almighty God, united with his divinity, and she lamented grievously, for those that trampled join the same, and did deplore their sins, who (as the Apostle St. Paul saith) Trod the Son of God under foot, and esteemed the blood of the testament polluted.

3. When she came to her losing, the Bless Virgin with great humility rendered thanks to those two devout and noble gentlemen, Joseph and Nicodemus, for that work of charity which they had performed towards her Son, and so courteously took her leave of them: and peradventure she said unto them, that which David said to the inhabitants of Galaad. When they buried Saul slain by the Philistines; Blessed be you to our Lord which have done this mercy with your Lord Saul, and have buried him, and now our Lord certes, will render you mercy, I also will requite you the good turn, for that you have done this thing.